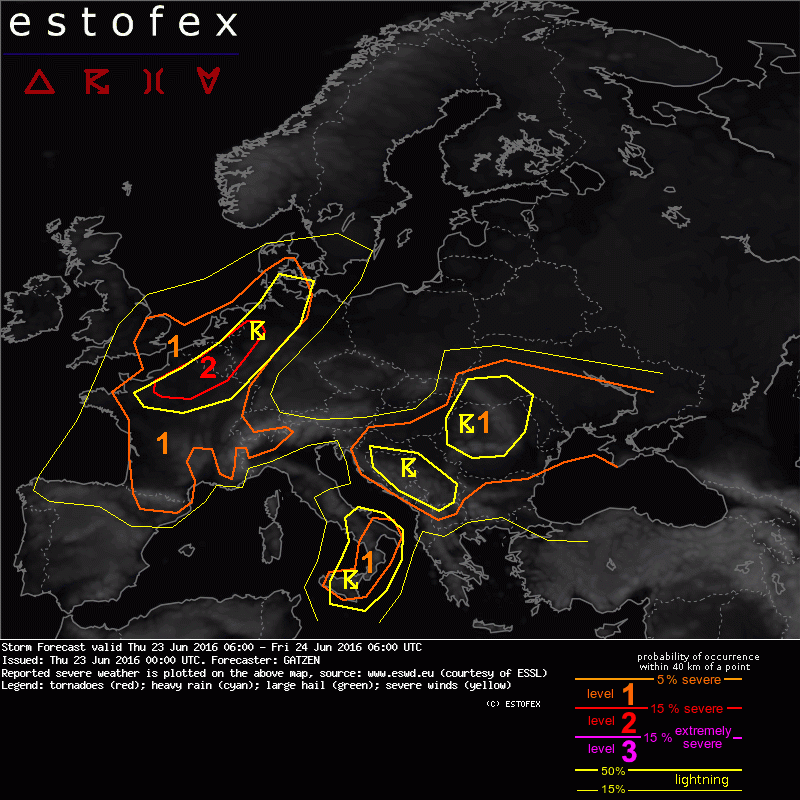 A level 2 was issued for northern central France into Belgium and north-west Germany mainly for severe wind gusts and large hail.

A level 1 was issued for western and central France mainly for large or very large hail.

A small and intense cut-off low is slowly digging over Sicily. Ridging strengthens from the west Mediterranean to central and eastern Europe in the wake of a weak upper trough that leaves the forecast region over the east Ukraine. Between the ridge and low geopotential over western and northern Europe, strong mid-level flow is expected from the Bay of Biscay to southern Scandinavia. At lower levels, rich moisture remains over large parts of eastern Europe south of a cold front across the central Ukraine. Another tongue of rich moisture is present along a frontal boundary stretching across west Europe.

Widespread thunderstorms will go on during the night hours along the frontal zone over western Europe and are expected to affect also Thursday morning. Ahead of the main trough axis, weak ridging can be expected in the late morning hours and decreasing activity may allow for some diurnal heating of the moist low-level air mass. Due to the overlap with an EML as indicated by latest Bordeaux ascent, high CAPE values of 1000-2000 J/kg are possible.

Initiation is most likely along the sea breeze convergence over northern France into the Netherlands. However, overcast conditions and rain of overnights storms may limit CAPE here. Further storms are expected along the southern edge of overnights outflow boundaries over France, Benelux, and northern Germany. Vertical wind shear will be strong with 15 to 20 m/s deep layer shear, and splitting storms or multicells / bow echoes are forecast. Main threat will be severe wind gusts along with large hail. Widespread hail / wind events are most likely in the corridor highlighted by the level 2. One or two MCSs can be expected to move into north-western Germany late in the period, with severe wind gusts the main threat.

Higher shear and more favourably curved hodographs are expected near the coasts including the south-east British Isles, and the sea-breeze could support more low-level convergence. If diurnal heating can lead to sufficient low-level buoyancy, supercells and bow echoes could form near the shores of France and the Netherlands, posing a threat of tornadoes, large hail and severe gusts.