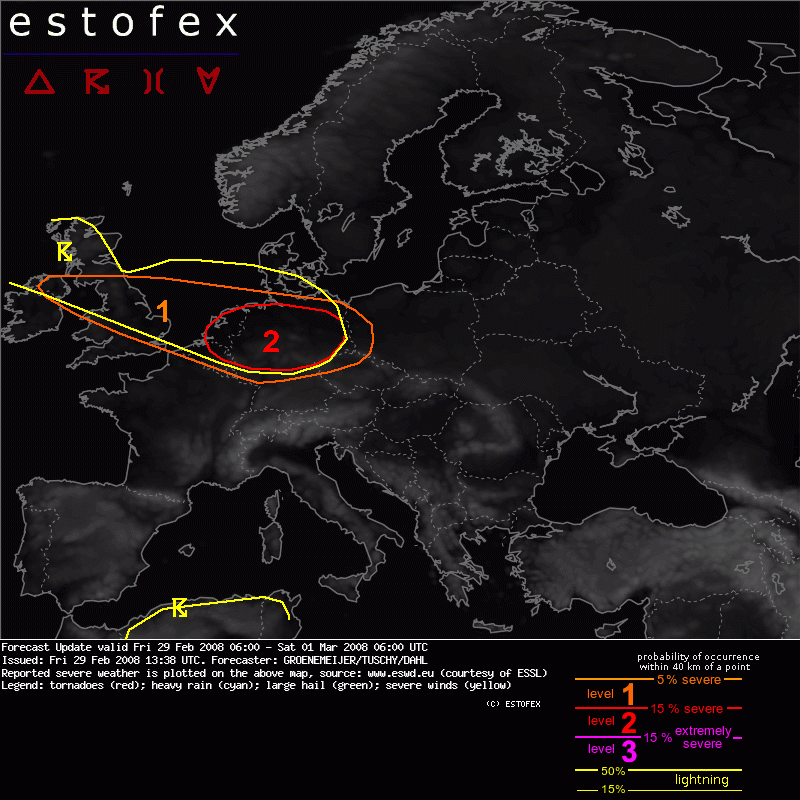 Refer to the convective forecast.

As mentioned in the original forecast, strong forcing for upward vertical motion is expected within the left exit region of an intense jet streak. The cold frontal zone of an intense surface low moving eastward over Scotland is the main feature of interest. It will likely develop a split-front structure as dry air overspreads the surface front. The surface front is expected along a line Edinburgh-Shannon at 18:00 UTC, Groningen-Southampton at 00:00 UTC, Szezczin - Frankfurt- Luxembourg at 06:00 UTC. It appears likely that the juxtaposition of moist low-level air, with dew points in the 8-10 C range, and strong forcing, will suffice for the development of a convective line. The structure of such a line will likely develop better as it moves southeastward across the British Isles, the North Sea and into the continent. Hence the risk of convective severe weather will probably increase as the frontal system translates southeastward.

Current thinking is that gusts exceeding the severe limit of 25 m/s will be relatively widespread, given that 850 hPa winds of 35 m/s are forecast near the line. Locally they may even exceed 32 m/s. The forecast storm-relative helicity of 300-400 m2/s2 ahead of the line suggests that some risk of rotating updrafts will exist near irregularities in the line, or with isolated convective cells ahead of the line. These will have an attendant threat of tornadoes likely of F1 or F2 intensity.

Aforementioned threats, of which the straight-line wind is the greatest, have prompted the issuance of a level 2. In contrast to original positive forecast it is more focused now on the area that will experience the strongest forcing.