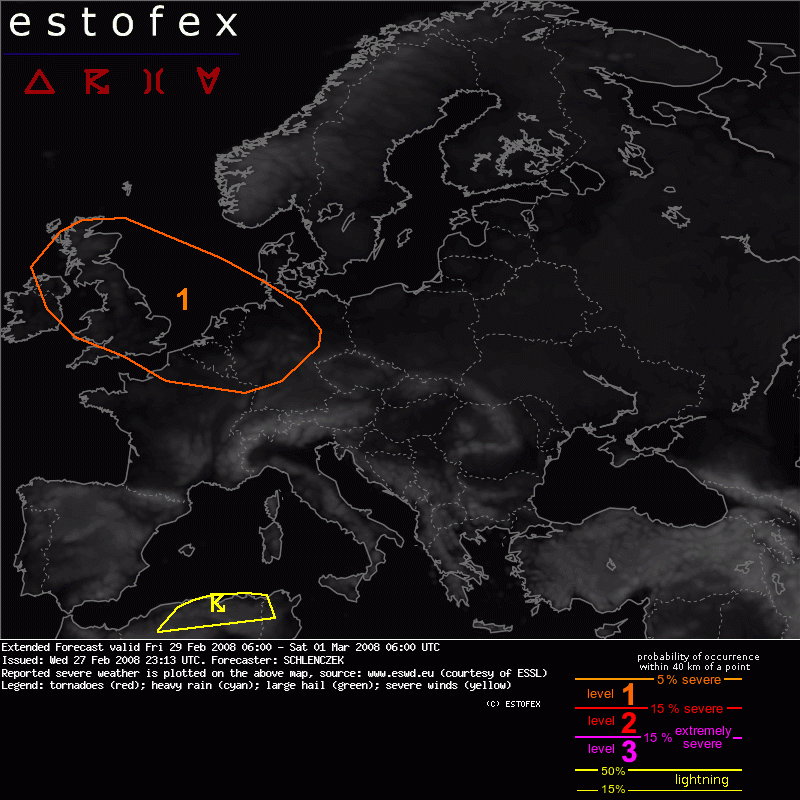 The features of the day are a vigorous jet over the Northwest Atlantic with wind speeds around 100 m/s at 300hPa and an associated shortwave trough southwest of Iceland. Strong cyclogenesis is expected to continue and around 00 UTC on Saturday, the surface low will have a central pressure around 956 hPa. Associated cold front will move across the northwestern British Isles around 18 UTC. Low-end instability should be present along the cold front and near the trough axis.

An upper level cut off low over the western Mediterranean will move southward. Thunderstorms with scattered lightning are forecast over Algeria. 0-6 km deep layer shear in order of 15 m/s may allow a few multicells but severe threat should remain low as instability and forcing are limited.

Ahead of the cold front, strong moisture advection will likely provide mixing ratios around 7 g/kg. As the upper trough approaches, mid level lapse rates are forecast to steepen to about 6 K/km and a few hundred J/kg of CAPE should be released along the cold front and near the trough axis. A low level jet with more than 35 m/s at 850hPa, almost perpendicular to the frontal boundary, will likely support convective lines that are capable of producing severe wind gusts.
Intense SRH1 / SRH3 around 400 / 600 J/kg predicted by GFS may allow some rotating updrafts that could produce some tornadoes as 0-1 km low level shear above 15 m/s is present over a broad area. Lightning may be rather sporadic and therefore no thunderstorm area is placed here.

Confidence for a possible severe weather day increased as all recent GFS runs, ECMWF, GME and UKMO predicted nearly the same thermodynamic and kinematic environment in the vicinity of the low pressure complex.