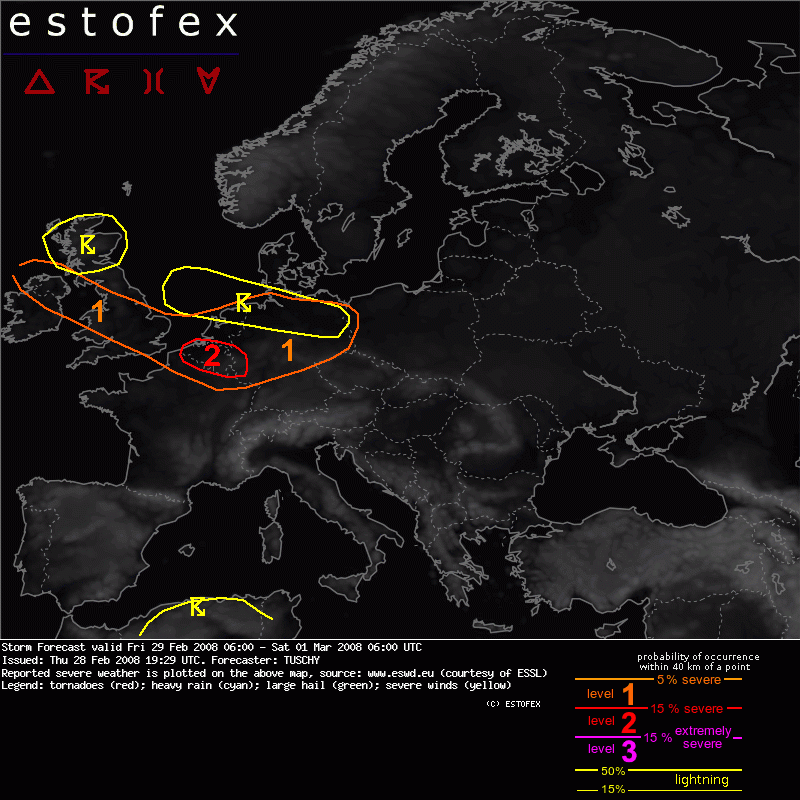 Nordhemispheric upper-level streamline pattern during the past 48h was conducive for the advection of a true tropical airmass towards the NE just east of North America. Despite modification, this column of very warm air has gained latitude refering to the latest MIMC-TPW loop and now underlays a developing high pressure area west / northwest of Portugal. This strengthening cell shifts eastwards with constantly rising geopotential heights. At the same time a broad cyclonic vortex continues to strengthen south of Iceland while racing eastwards. As a result of this strengthening baroclinic zone, an intense jet sets up over the northern Atlantic with up to 100m/s at 300hPa, pointing to NW Europe while assisting the cyclonic vortex by beneficial upper-level divergence in its exit region.
All those features result in a developing, intense wind field over NW and parts of central Europe during the next 24 hours.
Stable and cold conditions prevail over eastern Europe while dry and warm conditions continue over the Mediterranean.

... Belgium, the Netherlands and west-central Germany....

Overall we still deal with the baroclinic zone, which moved southeastwards, reaching Belgium and the Netherlands after 00Z. 700hPa temperatures will cool down a little bit between 00Z and 06Z which helps to weaken / lift mid-level cap somewhat. Nevertheless, capping will be too strong for deep convection and again low-topped convection along the SE-ward racing cold front will be the primary convective modus. 200-300 J/kg SBCAPE at lowest 3km are forecast and was shown persistently during the past few model runs. Speed max at 700hPa gets even stronger compared to the UK and reaches 50m/s after 00Z while attendant exit region overspreads the area of interest.
Forecast soundings show a favorable environment for tornadic thunderstorms as veering is strong, T-Td spread is small and convection should be surface based. 0-1km helicity above 150J/kg, 0-3km shear of 20-35m/s and winds at 850hPa above 30m/s point to a enhanced tornado and severe-damaging wind gust threat.
Again, dependant on the degree of convective activity along the cold front, a progressive-type LEWP squalline could evolve out of this environment with a tornado and severe wind gust risk, while racing southeastwards, reaching west-central Germany during the end of the forecast period.
Because of the persistent signals of nice shear / instability over this area a level-2 was issued.

More uncertainties exist over N-Germany as instability will be very limited and GFS only has traces along the eastward racing cold front. In contrast to the aforementioned areas we now expect deep convection as mid-level lapse rates steepen to at or above 6K/km. Potent mid- / upper-level jet is placed to the south and hence strong upper-level divergence values will be present over N-Germany. Again, the cold front, reaching NW Germany at about 00Z and eastern Germany only 6h later will be the main focus for convective activity. Despite impressive forcing, shear at all levels will be somewhat weaker than further towards the south and BL moisture somewhat worse. Current thinking is that also this part of the cold front gets convectively activated with an attendant severe-damaging wind gust / tornado risk.

Severe weather threat should continue in the postfrontal airmass especially if indeed such a well defined convergence zone can evolve like GFS wants to.
We issued a thunderstorm area as deep convection will be possible.