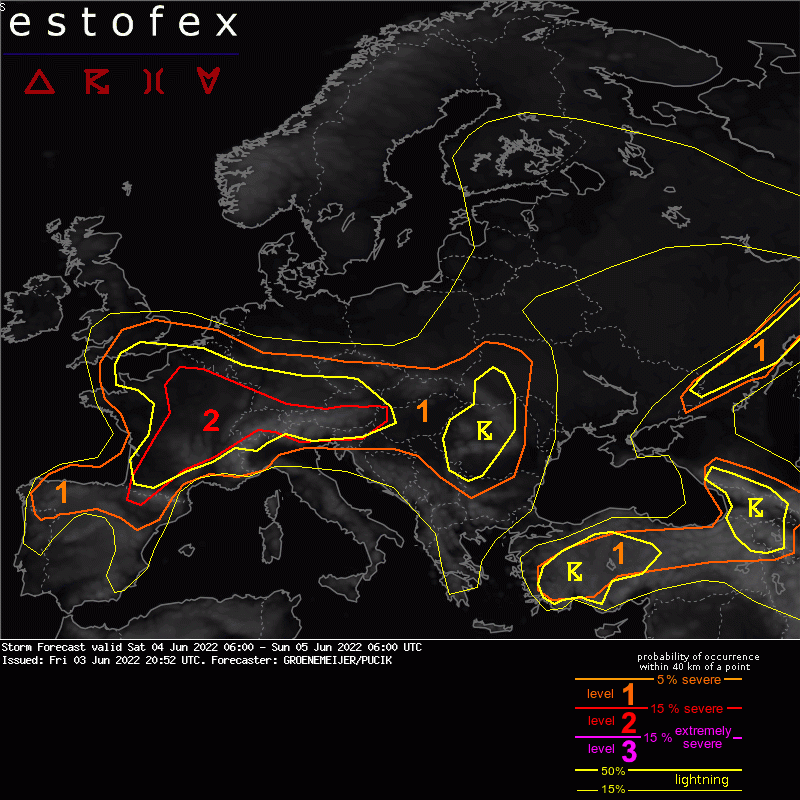 A level 2 was issued across a large part of France and for northern Spain for (very) large hail, severe wind gusts and very heavy rainfall.

A level 1 was issued across western France, the UK, southern Benelux and western parts of Germany primarily for very heavy rainfall, and secondarily for a risk of isolated severe wind and hail.

A level 2 was issued for the Alps and Alpine forelands for large hail and severe wind gusts as well as very heavy rainfall.

An active convective weather pattern is forecast across Europe. In the mid to upper troposphere, a deep low will reside over the Atlantic and a trough is forecast to lift from W Iberia towards France. Further north, a trough will move from South Sweden and Denmark to the Baltic states and Poland. A shallow, quasistationary low is centered SW of TÃ¼rkiye.

Closer to the surface, a complex frontal zone will run from Iberia through W France into Belgium, central Germany, Czechia, Slovakia, Ukraine and Russia. Along and just south of the frontal zone, a moist boundary layer is forecast with mixing ratios around 12 g/kg. A complex, slack surface low is located near Brittany. On its southern flank, across Southwest France, increasing westerly winds that bring somewhat cooler and stable air are expected to pick up during the evening and overnight.

In the morning hours, elevated storms will likely be ongoing north of the warm front across and around the English Channel. These storms may pose a risk of heavy rainfall. Weaker storms and cloudiness may also be present further south, potentially affecting the situation later on and establishing some outflow boundaries, along which convective initiation could take place in the afternoon.

NWP models are in agreement that the boundary layer over the area will be humid, and that fairly steep 6.5+ K/km mid-tropospheric lapse rates will be in place. In the afternoon, MLCAPE will be in the 1500 - 2500 J/kg over large parts of France with the notable exception of western regions, overlapping with 0-6 km bulk shear in the 20-25 m/s range. The best potential for intense supercells, based on the forecast hodographs, will exist over S France and north of Massif Central.

The storm coverage will quickly increase towards the late afternoon and evening as the trough approaches from Spain and a diffuse cold front moves E-ward across the region. While isolated supercells with a (very) large hail threat are likely first, upscale growth is expected between 18 and 21 UTC with a large mescoslale convective system travelling north to northeast, capable of severe wind gusts and heavy rainfall. The storms will spread both northward and eastwardE during the night with a continuing isolated severe weather threat of heavy rainfall, large hail and severe wind gusts.