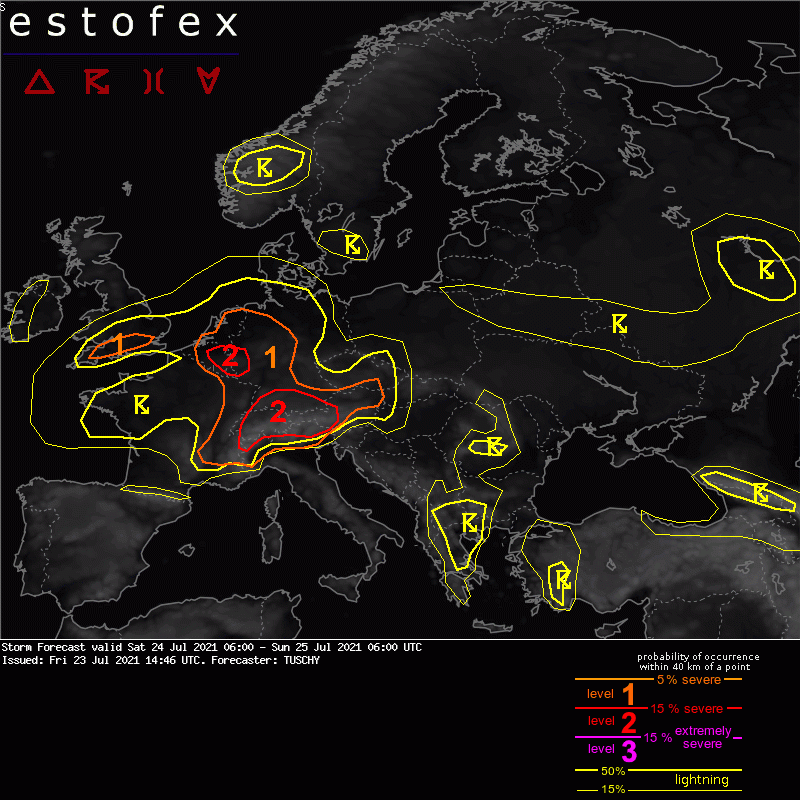 A level 2 was issued for Switzerland to S Germany into Austria and extreme N-Italy mainly for large/damaging hail, severe wind gusts and heavy rain.

A level 2 was issued for parts of Belgium/Luxembourg into extreme W Germany mainly for excessive rain.

A level 1 surrounds both level 2 areas and includes also an isolated tornado threat.

A level 1 was issued for S-UK mainly for heavy rain.

Blockish pattern persists as an upper trough with an embedded distinct vortex approaches England/Belgium until 06Z. Downstream positive 500 hPa geopotential height field with gradually lowering anomalies betimes covers E-Europe into S-Scandinavia but both features remain progressive during this forecast (hence no real blocking event).
Another trough is parked over SE Europe (Turkey) with no real net motion in any direction while the S-Mediterranean remains hot and dry.

ICON/GFS/IFS show stable solutions with a good intra-run consistency. Subtle differences exist with weak short waves, but this uncertainty hopefully subsides in the future runs.
Complex pattern of MSLP geometry over W-/CNTRL Europe yields a dominant/eastward propagating despression over the Normandy and an eastward arching channel of lower surface pressure towards Benelux, bending SE to Germany. Geometry with this channel/strength differs, although all models agree in the overall configuration.

Please refer to yesterday's discussion for more detailed input (attached below). We will just update those areas to reflect more/new data input.

The main change was to upgrade parts of Switzerland into Germany/Austria to a level 2.
Residual cloud cover from the previous night could be an issue, but current idea is hat most persistent cloud shield stays W of Switzerland and points into W/CNTRL and far SW Germany. Strong isentropic ascent with a channeled low/mid-level jet should support training convection over E-CNTRL France well into the day (locally excessive rain!). This activity would frame a warm/humid and unstable warm sector over Switzerland into Germany and towards Austria/N-Italy.

CAPE-shear space is favorable with following readings during the afternoon (MLCAPE - 6km SHR - 3km SHR and 3km SRH): Switzerland (1500 J/kg - 25 m/s - 15 to 20 m/s and 150 to 200 m^2/s^2 // W-Austria into S Germany (1000 to 1500 J/kg - 15 to 20 m/s - 10 m/s and 100 to 150 m^2/s^2).
CI is probably delayed until the afternoon hours with only gradually relaxing synoptic-scale subsidence. Initiation occurs first along the orography and is focused over E-Switzerland into W-Austria with multicells/a few supercells producing large hail and severe wind gusts. The complex orography may enhance a local flash flood risk until thunderstorms detach from the orography with one focus over SE-Switzerland into S-Austria. This activity spreads E towards CNTRL Austria with an ongoing severe threat, including large hail, heavy rain and strong to severe wind gusts. The level 1 was expanded E to account for ongoing nocturnal convection into E-Austria.

During the late afternoon into the evening hours, organized multicells and a few supercells finally erupt in the rest of Switzerland but also over SW Germany with a favorable CAPE/shear space for large/damaging hail and severe wind gusts. This activity may also grow upscale on a regional scale into progressive bow echoes (with favorable 0-3km shear in place). Again with not much background forcing to work with, local orography including numerous convergence zones play the main role for CI. Later-on during the night, this activity grows upscale into a large cluster, which affects NE-Switzerland into S-Germany. This is forced by a leisurely eastward shifting cold front which seems to stall over W-Switzerland, offering a prolonged period of enhanced LL convergence. Heavy rain becomes the main issue - mainly from NE Switzerland to SW Bavaria.

Further W, not much modifications occurred with a broad level 1 streched all the way to Benelux. N-ward shifting morning convection with residual cloudiness should delay CI into the afternoon/evening hours. Then, the input of cloud advection from France should weaken with some temporal diabatic heating possible - enough to erode the weak cap. 1-1.5 kJ/kg MLCAPE and 10-15 m/s DLS await this convection so a few hail and heavy rain reports are possible.

A growing concern for a more organized threat arises from Belgium to Luxembourg into far W-Germany, where latest data gives a non-zero chance for a weak surface low to evolve, which enhances forcing. A resulting growing cluster of storms could become an issue for excessive rainfall amounts. Persistent signals in some EPS fields and TPWs well above 30 mm convinced me to upgrade for a level 2 mainly for excessive rain. In addition, a few funnel/short-lived tornado reports are possible along the LL confluence axis with maximized LLCAPE.

No change to the northern part of the level 1 into N-CNTRL Germany with a few strong to isolated severe thunderstorms bringing hail/strong wind gusts and heavy rain. We trimmed back the level 1 from the E as dry air advection seems stronger than anticipated. Covered all of the Netherlands for a localized excessive rainfall threat with slow moving storms. Any more polward drifting storm could also bring hail with more organized updrafts (enhanced SR winds).

NWP guidance still indicates a virtually uncapped airmass beyond noon with 30 m/s DLS and up to 3000 J/kg MLCAPE. In addition a dry line moves from the W-Apennines towards the S-Alps but again - even the ensemble data is very reluctant with CI away from the orography with strong subsidence present until the evening hours. Hence a sharp level gradient exists over N-Italy but it was broadened over NE Italy with a bit better QG forcing there to work with. Any evolving cell is able to produce large hail and severe wind gusts. SW Austria/NE Italy were added to the level 2 to account for an enhanced severe risk.

... S-UK ...
Not much change here despite a confined level 1, where current data indicates an enhanced risk for repeatedly developing showers/thunderstorms with heavy rain.

No signifcant change for the rest of the highlighted areas.

... Far E France, Switzerland into Austria and Germany and Benelux ...

Current thoughts are that residual convection from the previous night with a diurnal weakness shifts from NE France into Germany until noon and is bound to the surface pressure channel (still able to produce a few heavy rainfall events over Belgium, Luxembourg into far W Germany). Drier BL air filters in from the SE and should suppress CI until it approaches NW/N-CNTRL Germany during the afternoon hours (then producing slow moving convection with rain issues). TPWs increase to 40 mm in its wake.

Another push of WAA is noted from France ahead of the steering depression, which spills rich BL moisture with Tds in the upper 10s/lower 20s into Luxembourg and W/SW Germany while TPWs decrease to 30-35mm - caused by drier air at mid-levels entering the scene from the SW, increasing potential instability (with weak/modest QG forcing from the SW) and offering the highest MLCAPE values of the day in these areas (1000-2000 J/kg from Belgium/Luxembourg to S Germany during the afternoon/evening).

Expect scattered CI beyond noon with organized multicells producing hail and healthy rainfall rates (probably a mixed mode). Current focus for CI resides along the second WAA feature/LL confluence zone and hence over NE France into SW/CNTRL Germany. Of concern is augmented 0-3km shear, which strengthens until the evening with some better curved hodographs in that layer. Hence, better streamwise vorticity for deviating cells increases the risk for rotating updraft with large hail/severe wind gusts. An isolated tornado is certainly possible in case a more discrete cell evolves in this low LCL setup. In case of upscale growth, bowing segments with strong/severe gusts are possible, too. Current focus for this enhanced wind gust/isolated tornado risk resides from N-Switzerland to SW/CNTRL Germany, but this could still change with new data.

Heavy to excessive rain is an issue everywhere especially with merging cells and initiating convection along the orography.

A lull in activity seems to become established towards W Germany into Belgium with competing forcing mechanisms. Overall I do not trust the very reluctant models as forecast soundings still show weak/non-existent capping and some diurnal heating. Subsiding synoptic conditions including temporal mid-level CAA seem to suppress CI in model fields, but this weakens towards the late afternoon hours with an approaching wave from the SW. In addition, the orography should do its job and hence we added this whole area into a level 1 mainly for excessive rain with slow moving cells (with an isolated hail risk in strongest updrafts).

The activity weakens during the night with some flare up over the S North Sea, where a nocturnal elevated cluster may evolve.

Slow moving convection within the deformation band brings high rainfall amounts. Good ventillation aloft and a mean storm motion of 5 m/s should support a few heavy rainfall reports although a weakening/decoupling inflow from Benelux should keep this risk in check. EPS data has a few higher members, but otherwise nothing to justify a level area for now. Could see a small upgrade, if more aggressive IFS verifies (right now still an outlier) but general progressive nature of this deformation band should keep these probs. low.