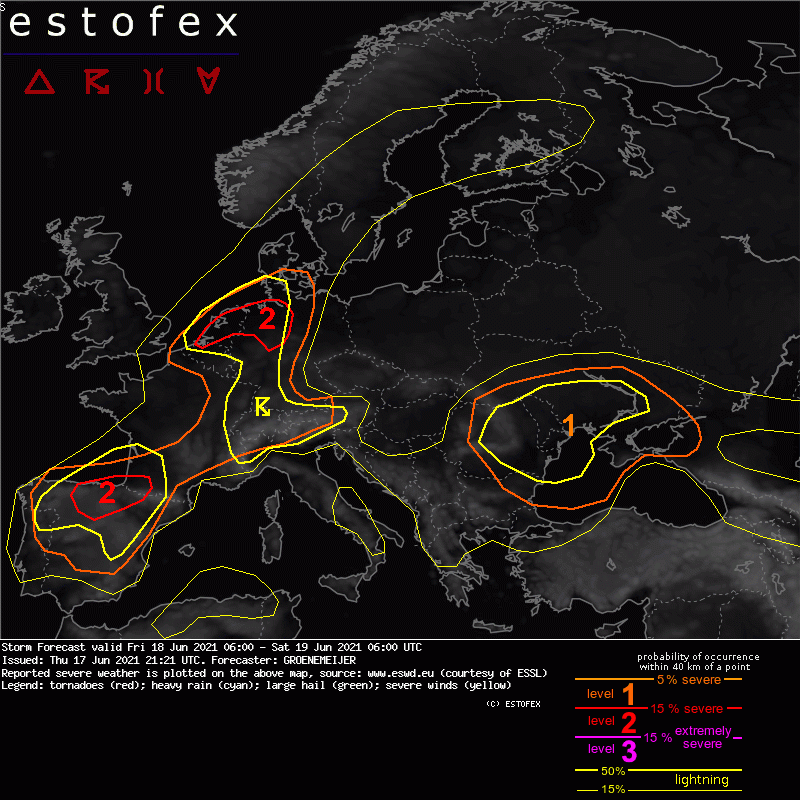 A level 2 was issued across the Netherlands and northern Germany for hail, tornadoes, wind gusts, and to a lesser extent for localized heavy rainfall.

A level 2 was issued across North Spain and extreme Southeast France for large hail and wind gusts, and to a lesser extent for localized heavy rainfall.

A level 1 was issued for large parts of Romania and Ukraine, for Moldova, for Northeast Bulgaria, and for a part of southern Russia, mainly for localized heavy rainfall and to a lesser extent for waterspouts.

Across the Benelux, a warm front stretching northeastward from a low-pressure area initially located across Normandy is expected to lift northward during the day. Elevated convection should be ongoing on the cool side of the front and near the low's centre. Aided by quasi-geostrophic lift for upward motion and diurnal heating, scattered storms are expected to initiate over northwestern Belgium and the central to southern Netherlands in the afternoon. Deep-layer shear of around 15-20 m/s should aid updraft rotation, in particular where storms cross the warm frontal boundary, located near a line from Amsterdam to Bremen at 12 UTC. NWP models indicate MLCAPE values in the 1500-2500 J/kg range and enhanced 0-500m storm-relative helicity near this boundary, suggesting a transient risk of tornadoes with stronger cells crossing it. Any storms will have also have a risk of large hail of up to 5 cm diameter, isolated severe wind gusts, and local very heavy rainfall.

The remainder of Lower Saxony...

High MLCAPE of 2000-3000 J/kg and moderate to strong 15-20 m/s deep-layer shear create a potentially volatile environment for convective storms including supercells. The biggest question is that of storm coverage given the absence of a focused lift to trigger the storms. Despite this uncertainty, a level 2 was issued to reflect the high risk of severe weather with those that do form, which could easily produce very large hail of 5 cm diameter, severe winds, and very heavy rainfall.

A lower risk of storms with large hail and locally heavy rain exists across this area, the risk being lower as a result of lower instability, shear and/or storm coverage. Across Southwest Germany, scattered to widespread storm development is likely, but the severe risk lower than further north because of the comparatively weaker wind shear.