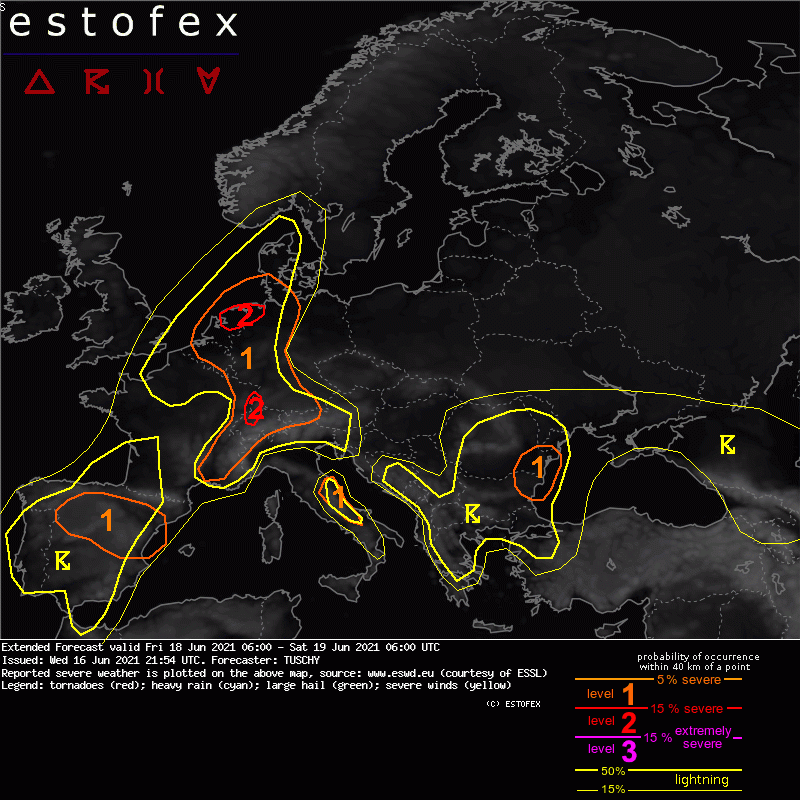 A level 2 was issued across parts of the Netherlands into far NW Germany for (very) large hail and severe wind gusts.

A level 1 surrounds that level 2 for similar hazards with less coverage. In addition a rainfall and isolated tornado risk exists.

A level 2 was issued across parts of E-France to NW Switzerland for (very) large hail and severe wind gusts.

A level 1 surrounds that level 2 for similar hazards with less coverage. In addition a rainfall and isolated tornado risk exists.

A level 1 was issued for parts of Spain mainly for hail and severe wind gusts.

A level 1 was issued for parts of Moldova, E-Romania and NE-Bulgaria mainly for isolated hail/heavy rain.

There won't be any substantial changes with the European geopotential height geometry as high over low blocking persists over E Europe with a quasi-stationary longwave trough just W of Europe. Same for the synoptic-scale fronts. Hence please refer to yesterday's synoptic discussion regarding those basics. We now concentrate on the main players for CI and how stable NWP guidance currently is.

Compared to the expexted lull in QG forcing on Thursday over many parts of W/CNTRL Europe, a robust low-amplitude wave ejects out of the base of the longwave trough on Friday and lifts NE over N France to Benelux/German Bight. Comparing models at Friday, 12Z GFS/ICON/IFS and JMA all show that wave over SE-UK with GFS a bit less amplified (weaker curvature vorticity) and ICON somewhat broader.
In the past 4 runs ICON places this wave constantly over SE UK but with a gradually flattening of the wave/flow. Thereafter, ICON now starts to shift the wave's track to the south and takes it towards the N-Netherlands until 06Z.
A similar trend is present with the past 3 GFS runs, now taking the wave a bit slower and on a more southerly track towards the German Bight. Same for IFS.
So overall models agree well with this wave and a track closer to the CAPE plume over the Netherlands/NW Germany seems possible.
Strength and placement of the major trough/ridge axes is constant in those models, so confidence in certain CAPE/shear maxima over parts of Euorpe increases.

... SE/E France, Switzerland into Benelux and W-Germany ...
Attached to the passing short-wave (see SYNOPSIS), a weak PV tower causes a BL mass response with all models showing a gradually structuring LL depression over NW France (06Z), Belgium (18Z) and the S German Bight (06Z). This depression pushes a structuring cold front E, which affects Benelux/W Germany from the afternoon/evening onwards. Main focus for CI however could be a prefrontal convergence zone, which interacts with an extensive CAPE plume covering the area of interest.

The combination of those LL lifting mechanisms interacting with the orography and diurnal heating all support an active day with numerous strong to severe thunderstorms over a broad area.

Luxembourg to Switzerland into SW Germany ... The latest idea is that initiating convection along the Jura/Vosges Mountains into Switzerland evolves into organized multicells/a few supercells due to 10-15 m/s DLS and regionally enhanced (by orography) 0-3 km directional shear (especially for right moving cells) with (very) large hail, severe wind gusts and excessive rain. With LCLs lowering to 600-900 m during the late afternoon hours a tornado threat may accompany strongest storms over E-France into W-Switzerland. This activity spreads E/NE with upscale growth into numerous large clusters. Moving into a deep/well mixed low-tropospheric air mass over SW Germany, cold pool driven severe wind gusts/large hail become an issue, next to excessive rain with cell mergers/during upscale growth. Betimes this activity outruns best forcing with increasing CIN, so a decrease in coverage/intensity over CNTRL/S Germany is anticipated. Dependant on the degree of organization of the individual clusters, the eastern fringe of the level 1 may see an adjustement to the E/NE in later outlooks.

A confined level 2 was issued, where currently the highest severe risk is forecast. If confidence increases in a cold pool driven MCS wind event, the level 2 may need to be enlarged a bit to the E/NE.

S France could see training convection with maximized 0-2 km flow so the level 1 was expanded all the way to the coast.

The Netherlands into NW Germany ... somewhat stronger forcing and 0-3 km flow/shear could support a longer-lived MCS event with large hail and severe wind gusts. In addition during CI, multicells/a few supercells are well possible with all kind of severe. Main uncertainty is how deep BL moisture will be as latest data highlights some chances for better diurnal mixing, lowering BL moisture and effective CAPE. Even with the most pessimistic scenario, 800-1500 J/kg MLCAPE is forecast with higher values on a regional scale (maximized BL convergence). Also activity from the previous night could cause some delay although rapid air mass recovery is anticipated thereafter. Mentioned uncertainties with the final geometry of the short wave also add an inhomogeneous picture with regional shear/CAPE maxima - IFS painting a quite dangerous picture, whereas GFS currently being a bit less aggressive.
A level 2 was added for parts of the Netherlands into far NW Germany, where all models show adequate CAPE/shear space for longer-lived and severe storms. (Very) large hail, severe to damaging wind gusts and heavy rain will be the main hazard but there is also a distinct tornado chance with enhanced LL shear and low LCLs.