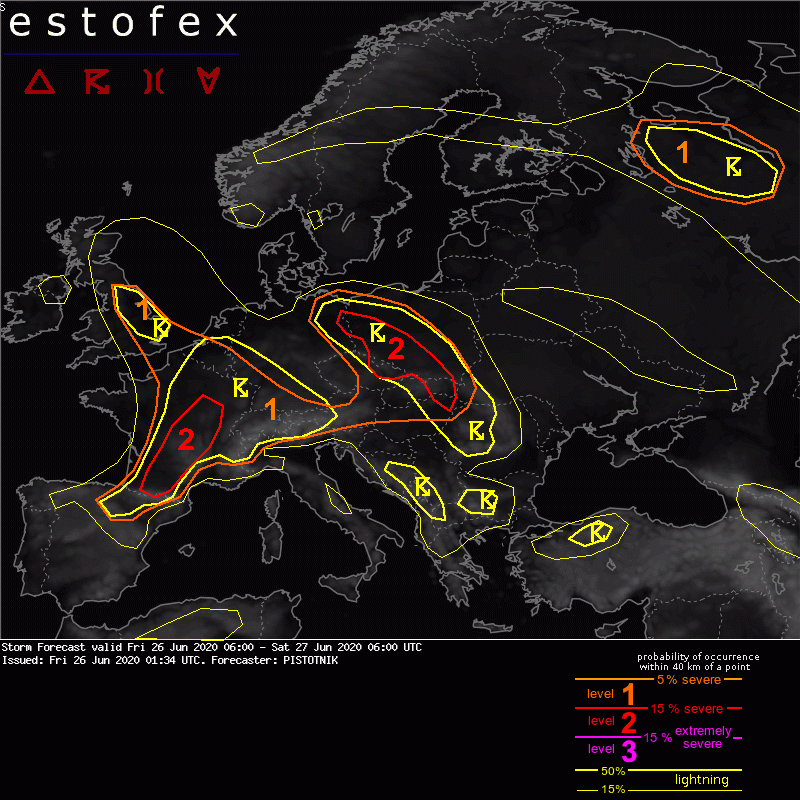 The blocking pattern softens and starts giving way to a meandering zonal flow. A broad mid-level ridge and an associated surface high cover E Europe, the Baltic region and S Scandinavia. It is opposed by a progressive mid-level trough and an associated surface cyclone that approach the British Isles and France. In-between, two filling cut-off lows with a NE-erly track are placed over the Czech Republic and central Turkey.
Very warm and often moist air masses cover most of Europe (with the exception of Ireland and N Scandinavia) and set the stage for an active day of mostly diurnally driven storms, partly enhanced by dynamics.

Warm air advection intensifies both ahead of the Atlantic trough and ahead of the filling cut-off low over the Czech Republic. Both warm air advection regimes are supported by steep lapse rates that spread from the Spanish Plateau across France, Belgium and England and from the Alps into the Czech Republic, Slovakia and parts of Poland, respectively. Fuelled by plentiful evaporation and delayed vertical mixing, low-level moisture accumulates and CAPE on the order of 500 to 1500 J/kg is expected to build across wide areas, separated by a wedge of slightly cooler, drier air with more limited instability from the Netherlands across much of Germany into Bohemia (left behind by the Czech cut-off low). The unstable areas largely overlap with slightly enhanced vertical wind shear (around 10 m/s across the lowest 3 km) and veering low-level wind profiles.
At least scattered thunderstorms are expected in numerous regions, though the warm air advection delays convective initiation and adds some uncertainties with respect to its placement and timing. The dominant storm mode will be a mixture of single cells, multicells and loosely organized clusters, which may grow quite large towards evening.
Due to the high coverage, rather slow storm motion and distinct possibilities of training or backbuilding, the primary risk is clearly heavy precipitation. However, especially discrete storms, some of which could temporarily turn supercellular, can also produce large hail, severe downbursts and an isolated tornado.

Areas with an expected particularly high storm coverage, and hence an excelling risk of excessive convective precipitation and flash floods, are:
(1) An arc-shaped convergence zone ahead of the Czech cut-off low from E Germany to W and S Poland, E Slovakia and E Hungary (in particular near its southern end, where a persistent inflow of "uncontaminated" warm air can keep side- to backbuilding storms alive into the night);
(2) The axis of maximized warm air advection ahead of the Atlantic trough in E England, Belgium and NE France; and
(3) A belt from SW to central France, where a long-lived MCS in the evening and night is a likely scenario.

Swaths of more widespread severe wind gusts are most likely in case large storm clusters develop within ~200 km north of the Pyrenees (i.e, S France) and Alps (i.e., N Switzerland and SW Germany), areas that can benefit best from the steep lapse rates that are advected off the elevated terrain. However, this scenario is too questionable to influence the drawing of the level 2 areas.