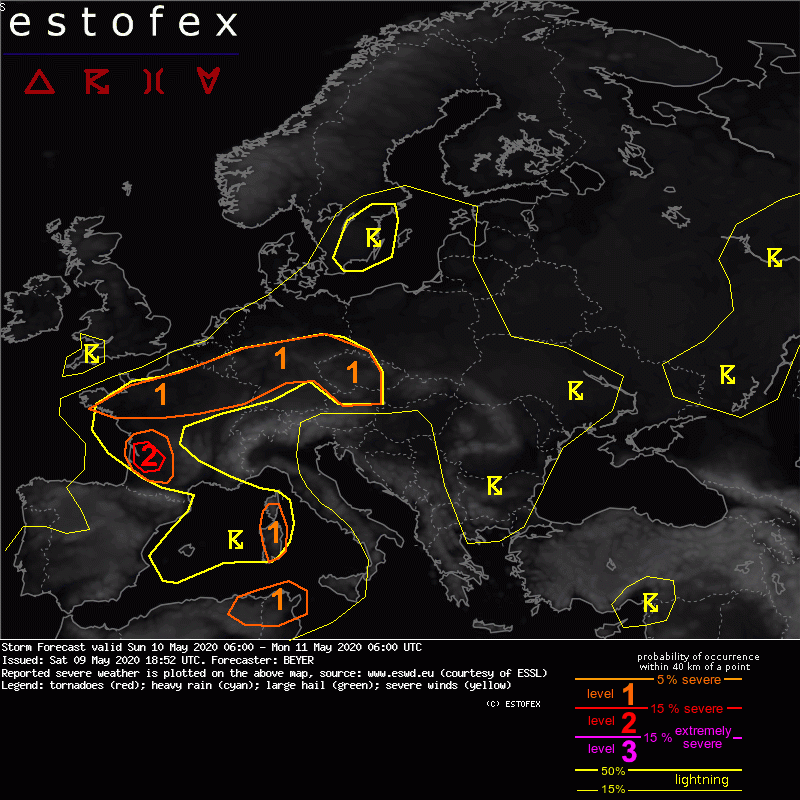 A level 1 was issued for Northern France into Central Germany mainly due to excessive precipitation.

A trough can be found over the Iberian Peninsula. The Western Mediterranean and parts of Western Europe are situated on its diffluent forward flank. With a southwesterly flow, warm and humid airmasses are advected in those regions.

During the day a low-pressure center forms over Southern France. The related cold front crosses the Western Mediterranean eastward during the day.

A pronounced and active trough can be found over Nothern Europe. Its strongly amplified axis is traveling from Northwest to Southeast throughout the forecast period. Airmasses of polar origin will flood North and Northwestern Europe.

With the progressing trough from the North and the diffluent forward flank of the upper level low over the Iberian Peninsula, the air mass differences over central Europe will increase. North of the french surface low a zonal oriented low-pressure trough will reach from Northern France into Central Germany including a low-level convergence zone.

Another upper level low can be found over Western Russia leading to some convective activity and rather cool airmasses from Eastern Ukraine into Russia.

A zonal organized low pressure trough with increasing low-level convergence is forecasted in this region. Combined with enhanced low-level moisture and instability a few hundred J/kg of CAPE can develop. The highest values of up to 1000 J/kg can be found in Northeastern France.

Several storms will develop along this convergence zone. Since DLS is rather weak they should mainly stay unorganized. However, the can cluster and several storms can move over the same area as mid-level wind vectors indicate. They are oriented along the convergence zone. Also, storms are forecasted to be rather slow-moving, especially to the east of the LVL1 area with 500 hPa winds around 10 kn.

Altogether, the main threat will be excessive precipitation. In the eastern part of the LVL1 area, DLS is a bit higher. Marginal to locally large hail and strong wind gusts can thus not be ruled out.