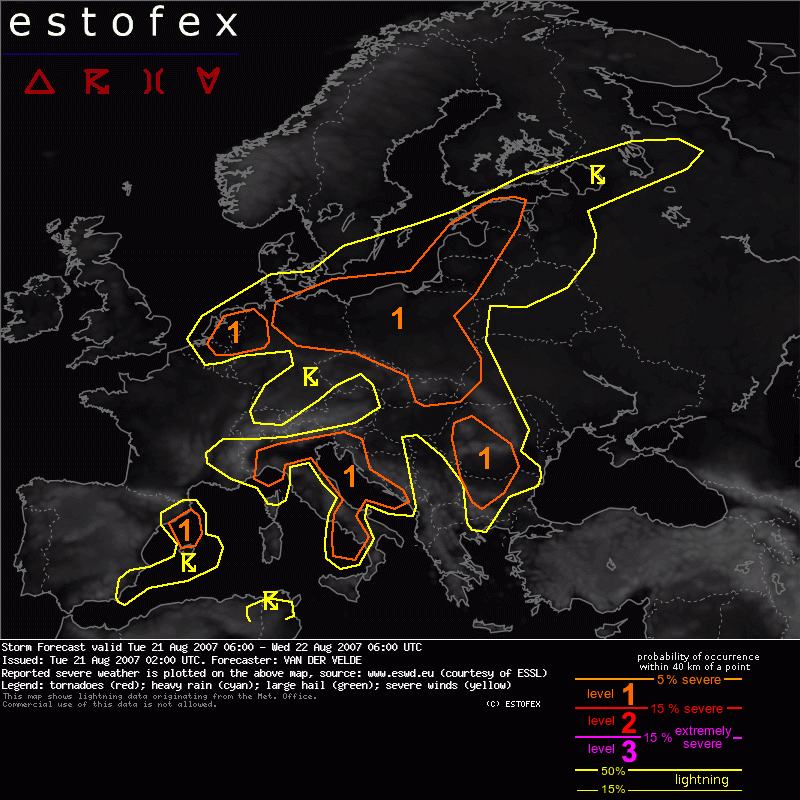 A large low pressure system has settled over western Europe, with the 500 hPa core over France and a surface low over western Germany at 15Z. Warm low-level airmass advects to the west around the north side of the low, while flow over central Europe is northward towards the warm front stretching from Denmark/northern Germany to the Baltic States. A weak old cold front may be found at mid levels and low level moisture from Poland into western Romania and Bulgaria, at altitude bending over southern Italy and Tunesia.
The jetstream is found at the southeastern side of the upper low, over Spain, the western Mediterranean Sea, Italy and the western Balkan.

Within the moist airmass north of the center of the surface low, slightly electrified showers may develop in a low CAPE environment... very marginal instability. Combined with very low LCL in the moist air, low level shear values reaching over 12 m/s, deep layer shear over 15 m/s and SREH >200-400 m2/s2 create an environment that is potentially capable of producing a tornado, if only organized convection would manage to develop. However, the massive cloudiness seems likely to inhibit convective chances.

This is the area where largest instability is found (1000-2500 J/kg), fair amount of shear (10 m/s) and reasonable triggering are expected. Clustered storms are likely to occur, with chance of large hail, especially where more helical inflow is present (SREH enhancements in GFS, mostly along the warm front over western Baltic States). High LCL over 2000 m and too weak deep layer shear do not suggest much chance for tornadoes even with 0-1 km shear >10 m/s and considerable CAPE. Severe gusts do seem possible at isolated scale.