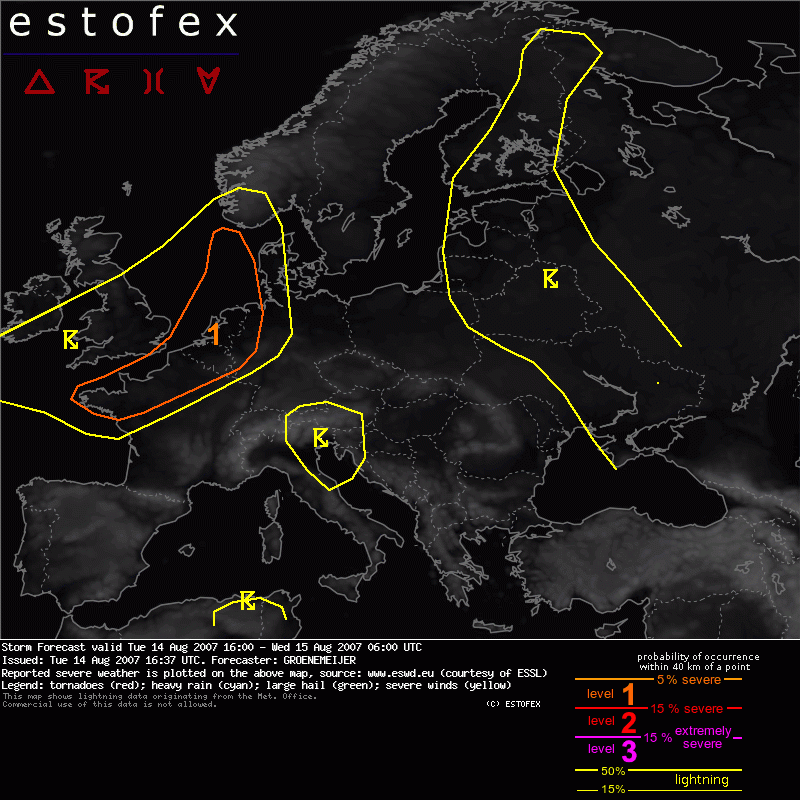 An intense quasi-stationary large-scale upper low is centered between the north British Isles and Iceland. A strong short-wave trough is present at its southern periphery, maintaining a vigorous surface low at its eastern flank in which a new centre is expected to form over Northern England during the evening. On its southwestern flank, strong warm advection is ongoing over western Europe ahead of a cold front south-central England to western Brittany to Galicia.

A very moist near-neutrally stratified air-mass is being advected into W France. During the evening hours increasing lift is expected to affect the moist air-mass that is effectively located between a poorly-defined warm front and the aforementioned cold front. As a result, a few 100s of J/kg CAPE located primarily in the sfc-500 hPa layer should form, and convection is expected to initiate over Brittany, Normandy and the Channel Region. The storms should move northeastward and reach the Benelux countries during the late evening. Winds around 25 m/s at 850 hPa, 0-1 km shear of 15-20 m/s suggest that storms will likely rapidly organize into lines. Given 0-1 km storm-relative-helicity in the 200-300 m2/s2 range, these lines will likely include a couple of rotating updrafts, which may produce a few tornadoes. Apart form tornadoes, straight-line local wind gusts in the 25-30 m/s range will be a severe threat. The threat is expected to persist to well after midnight UTC as the storms move to Germany. The expected local nature of the most severe events precludes the issuance of a level 2 at this time.