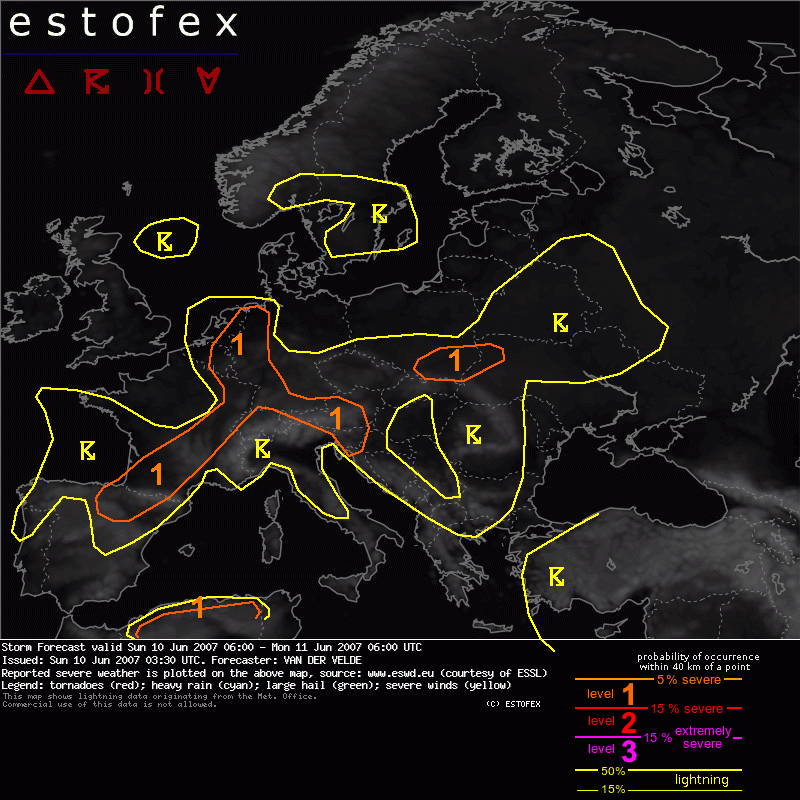 Weak pressure gradients in the lower 300 hPa prevail over the large area dominated by neutral pressure under a weak upper ridge.

A large area of daytime MLCAPE larger than 1000 J/kg is present over Europe, as determined from 00Z soundings. Dry sub-cloud and mid level layers may provoke a threat of severe gusts, while large hail of around 2 cm or occasionally more may be expected in large cores of clustered storms.

Orographic features and lines of convergence are the main triggering features and the latter are likely found again mainly over the Benelux and western Germany. In the mid to upper levels, small cyclonic features are present over northern France, east of Scotland, and over eastern Poland. These are associated with only weak QG lifting, but should be sufficient to enhance unstable conditions. Another upper low lingers over northwestern Turkey.
Stronger mid/upper level flow should be in place over northern Spain and southwestern France, where the Atlantic trough touches upon the mainland. A front will gradually push eastward into France and is likely to initiate a large mesoscale convective system during the evening into the night.

GFS indicates the largest CAPE values of Europe in this region and at least moderate shear. The Netherlands would see relatively high SREH3 values over 100-150 m2/s2 at 12-18Z if 20 knots and weakening NNW-ward storm motions. In fact, the 00Z observed hodographs in the region are fairly straight and long, best at the south side of the upper low, as Trappes and Idar-Oberstein, 15 m/s 0-6 km shear.
Storms are expected form large long-lived clusters along one or more convergence lines (created possibly by old outflow boundaries), whose position may not be accurately forecast by GFS, but tending to move from northeastern Netherlands at 09Z to Belgium in the late evening. Due to the alignment of the strom motion with the general orientation of the convergence line, storms may train over regions for a quite a while.
Besides flash flooding (and lightning), large hail will be a main threat. Isolated severe gusts are possible.

0-6 km shear in the 10-15 m/s range and occasionally SREH3 >100 m2/s2 support long-lived multicells or perhaps a marginal supercell initiating along the warm side of the frontal zone, where GFS produces strong deep convergence signals and a rich weakly capped layer. Storms are predicted to group together during the early evening to the north side of the Pyrenees and move deeper into France as a large MCS fed by a strong storm-relative moisture inflow. It seems that lack of steering flow (jet turns back to Bay of Biscay) limits the potential to form a squall line, but nevertheless there may be some brief threat of severe gusts during its life time due to the deep dry subcloud layer.

Slight upward QG motion is indicated in the model, with a band of moderate deep layer shear and some convergence during the afternoon. So, somewhat enhanced potential exists for a bit more organized convection producing large hail/gusts.

Another area of enhanced QG lift, convergence (18Z run) and SREH3 >100 m2/s2, and may just produce a bit higher chances for hail/gusts in the region, especially with the nice 00Z soundings.

CAPE, convergence, above 100 m2/s2 SREH and high LCLs combine in this region and may cause storms with potential of dry microburst, as well as marginally large hail.