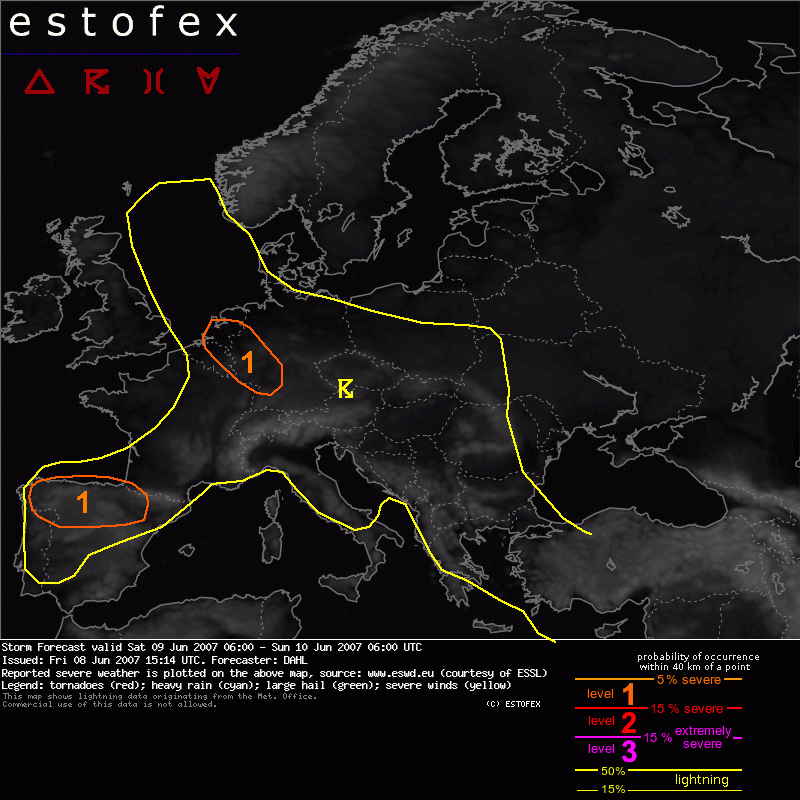 Omega upper flow pattern is establishing over Europe ... with one quite intense, quasi-stationary upper
low affecting the western Iberian peninsula and the other one over the Balkans. Small upper low is present over N France and the Benelux countries, which will make slow southeastward progress, reaching southern Germany at the end of the forecast period. Except for a few weak mesoscale low-pressure systems, the strongest one of which will be present over Germany, NE France and the Benelux countries, synoptically quiescent conditions prevail over central Europe. Weak SFC high will remain in place over the Norwegian Sea.

Ample CAPE with afternoon values on the order of 1500 J/kg will likely be in place again over the Benelux States and western/central Germany. Though deep-layer shear will be somewhat marginal with only 10 to 15 m/s, storms may evolve into intense multicells capable of large hail and strong outflow winds reaching severe limits.

Steep low-/mid-level lapse rates are present over the Iberian Peninsula as inferred from the available radiosonde data. It seems likely that inverted-V type profiles will develop during the day, though extensive stratiform cloudiness may remain in place and limit the degree of destabilization. However, at least weak CAPE is anticipated to develop. As DCVA-related lift overspreads the area, thunderstorms should develop especially over the northern Iberian paninsula. 15 to 20 m/s deep shear is expected, and given dry/deep subcloud layers, some threat for downbursts exists. Formation of one or more bow echoes is possible. Also, an isolated mesocyclone or two could form with a threat for large hail.

Storms developing in weakly capped and weakly unstable air mass over the Balkans will have some potential for strong outflow winds, which may briefly approach severe limits given quite deep any dry CBLs. Further north towards Austria, the Czech republic, Slovakia, Poland, and NE Germany, this tendency also exists. However, threat appears to be too low to warrant a categorical risk at the moment.