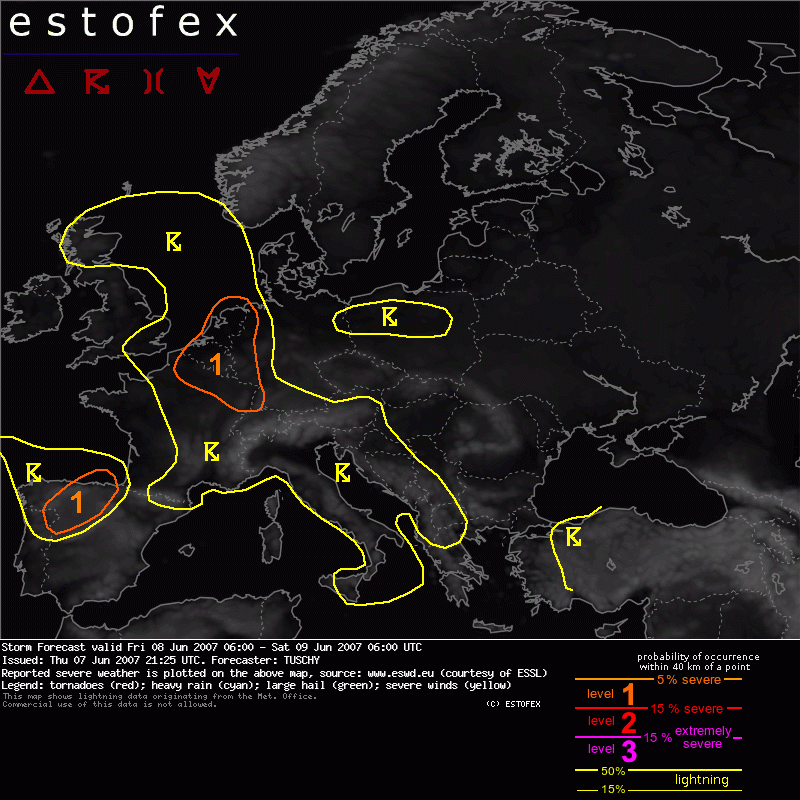 The overall structure should justify to call this synoptic weather pattern an omega blocking, although a better defined, meridional shaped upper-level jet structure over E-Germany and Italy would be prefered,.
Numerous upper-level disturbances rotate around the broad ridge over central Europe and will bring scattered thunderstorms to many parts of Europe.
Over extreme western Russia, quite cool and stable air pours southeastward behind a cold front, while a broad upper-level trough over the Atlantic advects an hot and dry airmass towards the north, covering SW Europe.

A confined pool of cooler mid-level air will be the main feature of interest while crossing N-France from the west towards the east. In general,the track and strength of such features are difficult to forecast due to the poor handling of the global forecast models, but apparently not in this case.
Replication of the latest IR / WV images and model forecasts show a surprisingly well accord regarding the position.
A swirl of locally cooler cloud tops roughly at 49N / 7W indicates this feature and models like GFS, NMM and MM5 all agree in track of this system, while showing slight differences in the propagation speed of this feature. It should reach Belgium during the latter part of the forecast period.

At lower levels, surface pressure should undergo a weak but constant decrease during the 24 hours and a mixture of a small LL depression and a N / SSE elongated low pressure channel is anticipated to evolve over eastern France and Belgium.
During the past few days, soundings of Belgium and the Netherlands showed an steadily vertical expanding and well mixed boundary layer with dewpoints approaching 20°C at the surface and 9°C at 850hPa. Yesterday's 12Z soundings indicated a deep pool of moist air currently present over those areas.

Strong diabatic heating should take place and temperatures in the level-1 area will reach around 25°C in the western half and around 30°C in the eastern half. Like yesterday, lapse rates are not impressive ( about 6°C between 500 and 700hPa ), but environment should be fine for 1000 - 2000 J/kg SBCAPE during the afternoon hours with MLCAPE values also approaching 1000 J/kg ( like De Bilt yesterday during the afternoon hours ).

During the day, thunderstorm initiation will start pretty early, as stable nocturnal layer will be mixed out and scattered to widespread thunderstorm development should take place from west toward the east. DLS will increase during the day and should reach 10-15m/s and will be enough for multicell storms with an isolated large hail and excessive heavy rain threat.
Low LCLs, eastward spreading mid-level vorticity and enhanced LL shear along outflow boundaries will also favor an isolated tornadic storm.

During the late afternoon, evening and night hours, a strong upper-level streak over N-central France will approach Belgium and nice divergence should spread northeastward. In addition, a frontal boundary will move eastwards and thunderstorms will increase in number.
Although there are no distinct hints in latest model outputs a line or a cluster of storms could easily develop , moving towards the NE / ENE.
This option was reflected in a quite far eastward expansion of the thunderstorm area.
Excessive rain and isolated large hail will be the main threat, but environment will still stay conducive for an isolated tornado report.

A tongue of higher theta-e values will be advected well towards the north over the North Sea.
SW of Norway, shear will be significantly enhanced ( LL shear around 15m/s, SRH3 around 300J/kg and DLS at or above 20m/s ) but instability should ease rapidly towards the north.
Any thunderstorm will pose a severe wind gust and tornado threat, but slim instability release should limit the coverage and no level-1 will be issued right now.

Diurnal driven thunderstorm activity can be expected over those regions. The boundary layer is somewhat drier compared to the level-1 region and this should keep instability release lower. Shear will be weak and numerous, pulsating thunderstorms will be the main storm mode. Clustering and slow movement will favor an enhanced flash flood risk, which does not get reflected in our risk scheme.

A strong vort max will cross NW and N-Spain during the late afternoon and night hours from the SW. Attendant forcing and moderately unstable airmass will be enough for scattered thunderstorm development and a cluster of storms can be anticipated to move towards the NE.
Steep lapse rates, 20m/s DLS and enhanced SRH3 values will help for rapid storm organisation with an enhanced large hail and severe wind gust threat.
Towards the southeast, activity should be confined due to a stout cap.