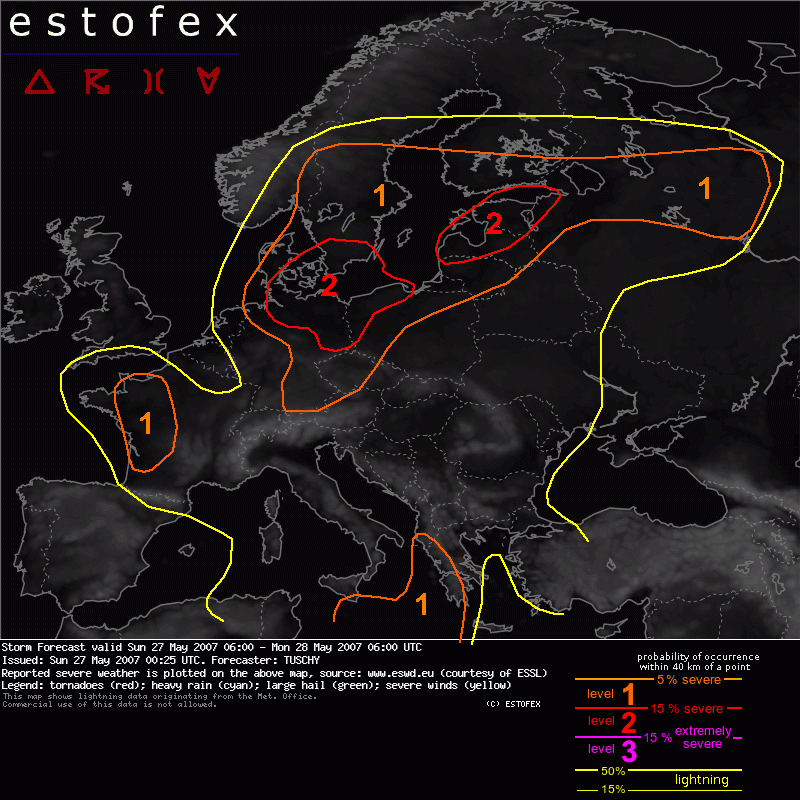 An intense 130kt upper-level streak will help to shift a well defined upper-level trough over Ireland constantly towards the east. Another, but weaker trough will cross the central Mediterranean from the west towards the east.
Downstream of those systems, a humid and very unstable airmass covers most parts of central and eastern Europe and an active convective weather day will be in store for many parts of Europe.
Areas over eastern Europe, which were not included into any level area could nevertheless see isolated strong to severe thunderstorms. Limited coverage and weak shear preclude the issuance of a large level-1 area.
Maturing, pulsating storms will pose an isolated large hail and strong wind gust threat.

An outbreak of severe thunderstorms is forecast to occur over some parts of Europe with damaging hail, severe wind gusts and a few - possibly strong - tornadoes !

During the early morning hours, a mesoscale convective system will go on somewhere over extreme N Germany, moving constantly towards the N / NE. 00Z radar loops already show this feature over central Germany, somewhat displaced towards the east than expected.
Intense veering, strong DLS and nice upper-level divergence will be enough for an isolated but temporarily weakening tornado / severe wind gust and large hail threat.

Aforementioned convective system evolved as a consequence of a well developed, N/NE-ward moving LL depression with a central pressure at or above 990hPa.
Models indicate a broad area of backing winds in a large warm sector, stretching from Denmark to S-Sweden, NW Poland and NE Germany. Mixing ratios are as high as 11g/kg and boundary layer dewpoints should easily reach 15°C.
Yesterday's soundings over eastern Germany already revealed pretty steep lapse rates and this fact, combined with the hot and humid PBL should help to boost instability values up to 2000 J/kg over extreme NE Germany and NW Poland.
Instability tongue with values of 1000 J/kg could advect westwards as far as S-Denmark.

The focus for thunderstorm initiation over E / NE Germany will be along the eastward moving cold front [ over central Germany around 12Z ] but strong diabatic heating and remnants ( like outflow boundaries ) of the weakening convective system could also overcome the cap in the warm sector.
A combination of moderate to high instability release and DLS of 15-20m/s favor rapid storm organisation.
High LCLs, wet-bulb zero around 3km and a pretty well mixed subcloud layer favor an enhanced large hail risk - some of them significant and damaging - .
Storm motion will be towards the east / northeast.

Further towards the south, thunderstorm coverage will be less.
Anyhow, latest model runs constantly increased DLS and helicity values over Bavaria and environmental conditions will be fine for rapid thunderstorm evolution with an attendant large hail threat , mainly during the afternoon and early evening hours. Pretty dry BL and possible foehny conditions preclude higher probabilities for the moment.

At the same time, another area of interest develops over N-Germany ( especially along the coastal areas ), Denmark and S-Sweden. Intense backing upstream of the northward lifting LL depression,a tongue of higher instability values and DLS of 15-20m/s favor and enhanced tornado threat with an isolated strong tornado possible, mainly in the level-2 area.
Steep-lapse rates and 15-20m/s DLS will be present an conducive for severe wind gusts and large hail.
Betimes, storms should start to cluster and this complex will move towards the NE.

Latest run to run consistency of the strength of expected LL depression was bad and this will finally decide how far towards the west severe weather can be expected.
We went with a pretty broad region to efface those uncertainties, which should become more clear in the nowcast time-frame.

A moist and moderately unstable airmass will cover those areas. Lapse rates at mid-levels will approach / top 7K/km and DLS will be in the order of 15-20m/s.
SSTs will be somewhat cool with 10-13°C and this could hamper the severe weather threat somewhat over the S / central Baltic Sea. Therefore a level-2 won't be issued.

Slightly warmer temperatures at 850hPa could suppress convective activity over the rest of Poland during the daytime hours, but intense diabatic heating should help to erode the cap during the later afternoon / early evening hours.
Constantly increasing LL shear, DLS of 20m/s and SBCAPE of 1 - 1.5 kJ/kg will favor rapid supercell development with an attendant large hail / severe wind gust and isolated tornado threat.
We want to wait for the 12Z soundings before updating / possibly upgrading, if necessary.

Like areas mentioned above, Latvia and Estonia will see a favorable environment for severe thunderstorm development.
High PBL moisture content and buoyancy will be present under mid-level lapse rates, which approach 8K/km. As a consequence up to 2000 J/kg SBCAPE look reasonable.
DLS will be somewhat marginal [ 10-15m/s ] but this should be compensated by enhanced SRH3km values...hence rapid thunderstorm organisation will occur.
Large hail - some of them signficant and damaging - and severe wind gusts will be the main threat.
Main tornado threat should stay confined to Estonia, where LCLs are somewhat lower.
Otherwise, tornado threat should be limited due to pretty high LCLs.

During the latter part of the forecast period, parameters for organized convection will come together over S-Finland.
Somewhat weaker buoyancy but stronger LL shear will be present and isolated large hail , severe wind gusts and a few tornadoes will be possible.

A far eastward extended level-1 should reflect the favorable environment for isolated to scattered severe thunderstorms .
Lapse rates possibly exceeding 8K/km and this could bring SBCAPE values well above 2000 J/kg and even MLCAPE values between 1000 and 2000 J/kg look reasonable.
A stout cap at lower levels should suppress convection until the early afternoon hours.
Again...DLS of 10m/s won't be that impressive, but nice SRH3 km values and high LCLs combined with those instability values favor rapid thunderstorm evolution with an enhanced large hail threat with isolated significant and damaging hail.
The threat should slowly ease during the night hours.

Latest model runs agree pretty well with an intense LL depression,affecting NW France during the daytime hours.
A strong dry slot, already present on WV impages will rapidly translate towards the E / NE, crossing the area of interest between 09Z - 18Z. A rapid cool-down at mid-/upper-levels will take place during the morning and early afternoon hours, while a still moist PBL will be present ahead of an eastward racing cold front. Some diabatic heating under the slowly eastward shifting dryslot could take place so that 200-500 J/kg SBCAPE looks increasingly likely.
Current thinking is that a line of storms will be able to form, racing towards the east.
LL and DL shear would be significantly augmented and an enhanced tornado and severe wind gust threat will be the result.
For the moment, a broad level-1 area will be issued due to various uncertainties like the degree of overlap of instability and shear .

A strong upper-level trough will cross the area from west to east during the evening and night hours. Constantly cooling at lower-/ mid-levels over the 22°C warm Mediterranean will be supportive for moderate to high instability release. DLS of 30m/s will pose an enhanced severe wind gust threat, especially if storms line-up.
A cluster of storms should go on just west of S - Greece around 06Z ( 28th May ).