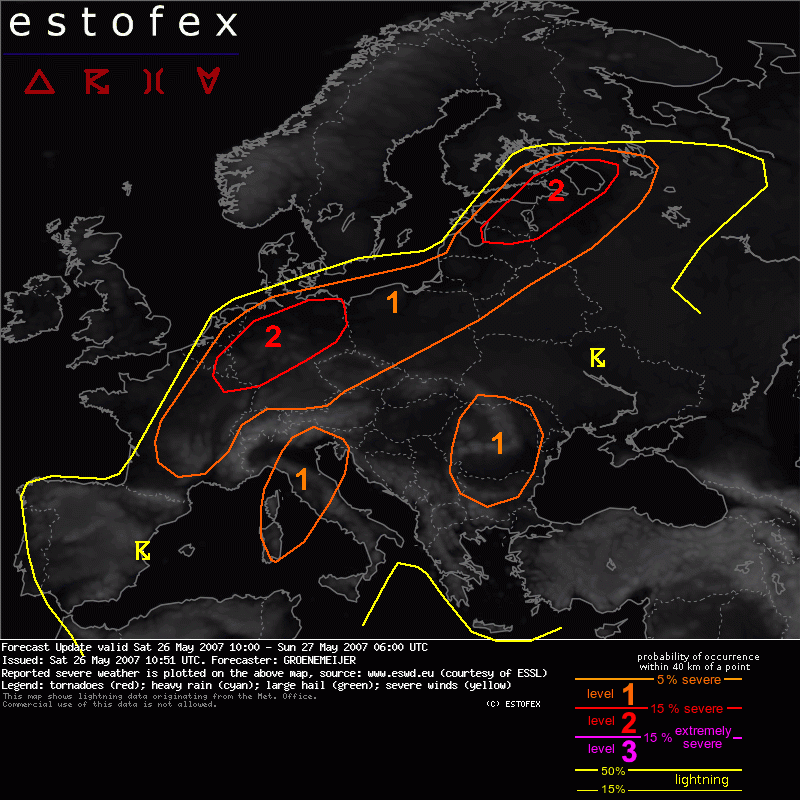 On the warm side of the frontal boundary that at 9:00 UTX stretched from western Latvia over central estonia to the Finnish-Russian border, a strong low-level jet is present that should increase to 20-25 m/s during the evening.

Weak, instability has been able to sustain a bowing system during the night and morning travelling into the Karelia and St. Petersburg area. Modest amounts of surface-based CAPE are building in response to solar heating over the Latvian, Estonian and Russian parts of the level 1 area.

New convective storms are currently forming over central Estonia. These may become supercells, but will likely organize rapidly into a bowing MCS racing northeastward through the level 2 area. Winds well exceeding 25 m/s can be expected. In addition to the winds, tornadoes are possible too, but somewhat higher LCL's in the warm air and the likely progressive nature of the system limit the chance that these will form. Some large hail, is possible too.

Have expanded the level 1 a little further south as soundings over central and S germany as display very steep lapse rates, suggesting a risk of large hail and possible downbursts where storms manage to initiate.

Deep-layer (0-6 km) shear of 15 to 20 m/s should be sufficient to help storms across Northern Italy organize into multicell clusters and a few supercells. These will have an increased threat of large hail and gusty winds.

00 Z sounding of Bucharest and Belgrade suggest that a deep mixed layer is present across the area with lapse rates approaching 10 K/ km, while locally significant moisture polling has occurred. Locally MLCAPE may therefore exceed 2000 J/kg during the afternoon. This suggest a significant threat of large hail with any storms, likely multicell clusters, that form in this environment. Additionally, downbursts are possible locally.