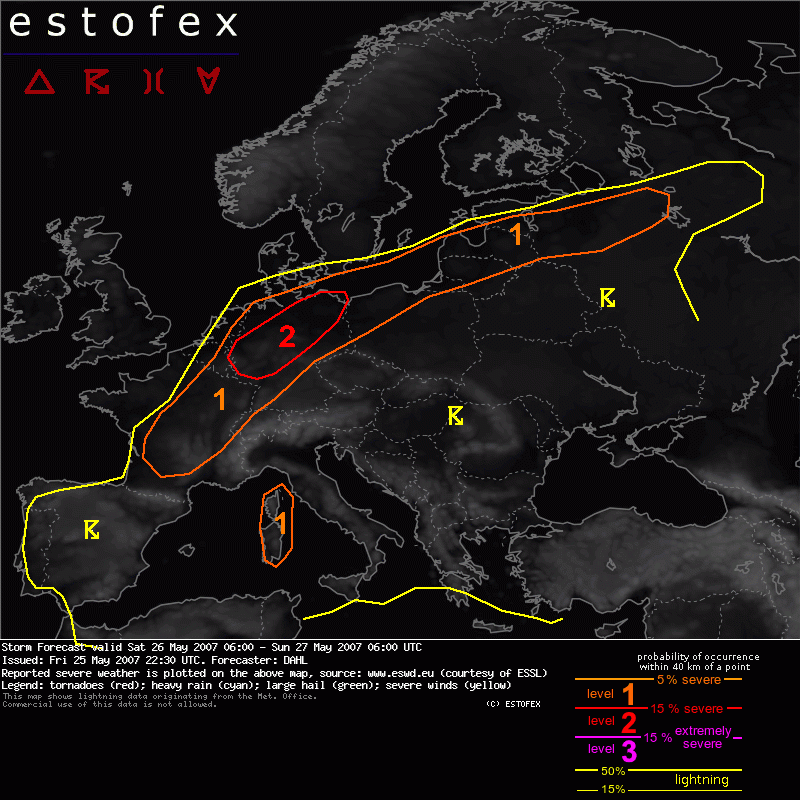 Active severe weather day expected over central Europe on Saturday. As rather intense northern-stream Atlantic upper trough digs southeastwards ... reaching the British Isels/N France late in the period ... it will merge with the upper cut-off cyclone over the Iberian Peninsula during Saturday. Comparatively weak upper low over the Aegean will remain in place through the period and accelerate eastward towards Sunday morning. Main low-level frontal boundary should stretch from N France northeastward into the Baltic States at the beginning of the period. Rather intense SFC cyclogenesis along and E of the front in response to weak DCVA associated with vort max exjecting northwastwards from the former Iberian upper low, is expected over Germany in the afternoon and evening hours. Farther W, strong cyclogenesis is simulated ahead of the digging Atlantic trough. Otherwise, SFC conditions are largely quiescent.

Afternoon MLCAPEs of up to 1500 J/kg will likely exist throughout much of the warm sector over central and eastern Europe E of a cold front that should extend from central France across central Germany into the Baltic Sea region at 12Z. Severe potential should be maximized over Germany and N France where deep-shear profiles will be strongest with 15-20 m/s. The central-European cyclogenesis should increase the LLS from central into NE Europe in the afternoon and evening hours. Outflow boundaries from previous convection may aid in enhancing the local shear profiles and increase the severe threat. Negatives are the weak capping which may result in early/widespread initiation ... on the other hand, debris from overnight's convection may delay convective initiation. Despite these uncertainties, it does seem likely that well organized storms develop along and ahead of the cold front from France into the Baltic States. Shear will be maximized in the level-two threat area per GFS ... and expect the entire facet of severe weather there, including (very) large hail, destructive wind gusts as well as tornadoes. Upscale growth into onw or more larger MCS's is likely in the evening/night hours.

Farther SW over France ... deep shear will remain quite weak, but low-level shear will increase in the evening hours in response to the central- and west-European cyclogenesis. Also, outflow boundaries should locally augment the low-level shear/helicity. This coupled with CAPE on the order of 1500 J/kg will be sufficient for a few severe storms, possibly mesocyclonic ones, with a threat for large hail, damaging winds and a tornado or two.

A couple of storms may affect Sardinia and Corsica in the first half of the forecast period. Shear and CAPE should be sufficient for well-organized multicells or supercells with a threat mainly for large hail, damaging winds, though a brief tornado cannot be discounted either.

Numerous storms are also likely to develop over eastern Europe. The severe threat seems to be somewhat marginal for a large level-1 risk area given vanishing deep-layer shear. However, orography as well as outflow boundaries of neighboring/previous storms will likely be encountered, which may support at least brief and isolated mesocyclones. Though isolated large hail/damaging wind events will likely occur, it does not seem that a categorical risk is required at the moment.