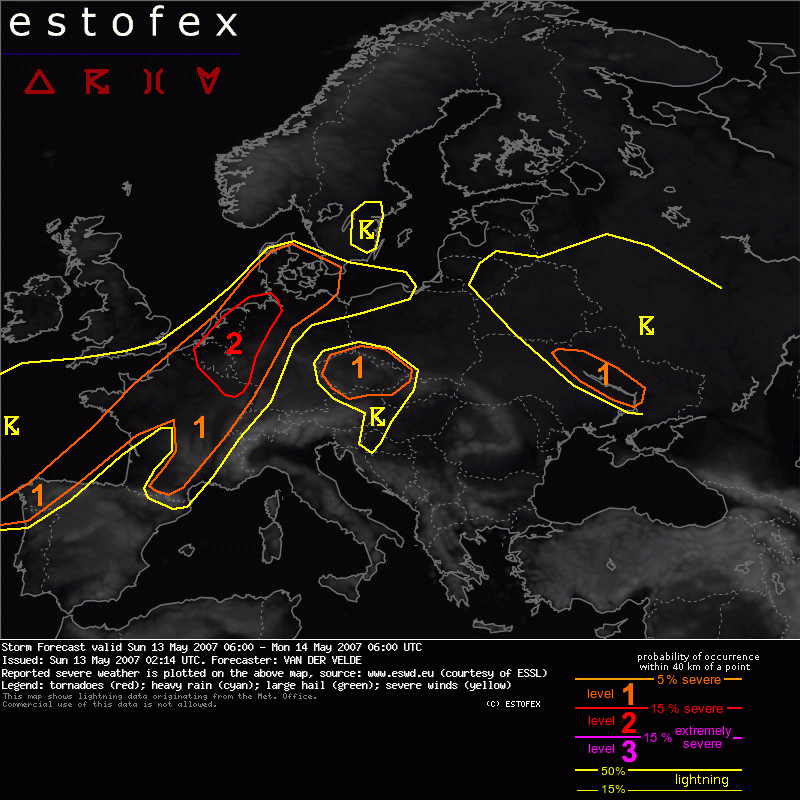 A significant low pressure system is forecast to move from the Atlantic west of France to the English Channel region and Denmark. The axis of a strong upper jet is predicted to cross Galicia, western France and the Benelux. At the time of strongest diurnal heating, the nose of the jet will be situated over northern France, with very high speeds also in the lower levels: 25 m/s at 850 and more than 30 m/s at 700 hPa forecast by GFS 18Z.

Models predict a few hundred J/kg MLCAPE in the warm sector, also near the frontal wave over Belgium at 15Z (GFS, NMM, MM5). The timing, location and magnitude of CAPE and shear has varied slightly over the past few GFS runs, but the presence of instability, shear and forcing has remained constant and indicative of a significant severe weather episode.

Scattered convection under weak instability is expected to occur during the morning hours over western France, which can already profit from strong vertical shear conditions (deep low level) and create isolated severe weaher as gusts or a tornado. As the day proceeds, forcing and heating are expected to increase and start to build more organised and stronger convection around Paris and near the wave over Belgium.

In the level 2 area, the deep layer shear vector is under some angle with the forcing, as judged from GFS mixing ratio advection fields, which is favourable for discrete cells initially, until the late afternoon, when cells are likely to merge and form a squall line, which will be effective in transferring strong wind speeds to the surface over a large area, thought to warrant a level 2. This system will proceed to affect the Netherlands and western Germany during the evening and move rapidly northward. It should lose strength when reaching Denmark. A somewhat limiting factor is instability and probably not very dry air except over Germany.

The 12Z sounding of Trappes should become representative of the environment.

More isolated storms are expected here after about 15Z along the front, with weaker low level shear southward but stronger deep layer shear, and SREH still higher than 100-200 m2/s2 giving a high probability that cells will develop more persistent mesocyclones or split. Large hail is the primary threat here. Severe gusts can occur helped by cold downdrafts (>12 degrees negative buoyancy at surface). During the evening, a band a enhanced low level shear may increase tornado chances a bit over the northeastern Massif Central. As the shear vector is much parallel to the front here, storms may have formed a line by then.

GFS and MM5 have indicated some convective precipitation here. While there should be quite considerable instability and favourable deep layer shear and SREH, chances seem a bit slim as no clear forcing is going to be present... perhaps orography. Would not exclude Bavaria totally... an update may be required but everything is likely staying localized. The warm front might set off a storm near the Czech/Polish border during the evening if GFS has it right. Large hail would be the primary threat in this area.

Another area where the jet crosses slight instability. >100 m2/s2 SREH and >20 m/s 0-6 km shear, so a few storms may display rotation and a slight chance of marginally large hail. A weak shortwave trough provides lift.

Have indicated area of slight instability crossed by deep layer/low level shear. Not much over land though.