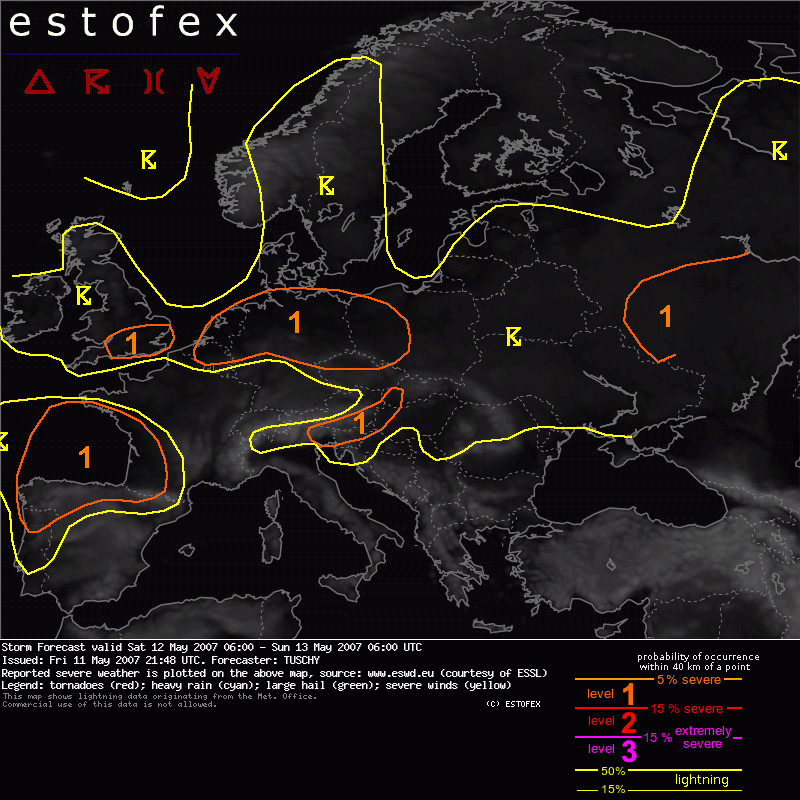 Active zonal flow pattern between a broad low pressure complex over NW Europe and marginal higher pressure over the Mediterranean continues during the forecast period.
The first depression over extreme western Russia will affect most parts of eastern Europe, while moving slowly towards the east.
A second depression will cross the North Sea from the SW while the third and strongest one evolves just west of the Bay of Biscay.
This will provide various areas of enhanced thunderstorm potential.

... Belgium, the Netherlands and northern Germany .....

There are indications that a few organized thunderstorms will develop in the highlighted area.

An occluded front will cross Belgium and the Netherlands between 00Z-06Z and will traverse N-Germany during the morning hours from the SW. The front will slow down while constantly shifting NE-ward.
Moisture advection charts indicate a well mixed and humid postfrontal airmass spreading north and northeastward.
Yesterday's 18Z synop datas already show dewpoints at or above 11°C behind the front over NW France and this looks reasonable and so does the dewpoint forecast of GFS.

A dryslot, present over the English Channel at 18Z WV image , will rapdily shift eastward, reaching W-central Germany around 03Z and E-central Germany about 3 hours later. Current thinking is that a few thunderstorms will go on / develop over central Germany, moving towards the E / NE. Although weakening, lift should still be adequate for some potential instability release and models like GFS indicate a rapid increase of more surface based instability over E-central Germany between 06-12Z.
Current thinking is that combination of strong shear in an uncapped environment with steep mid-level lapse rates would be fine for an isolated large hail / tornado risk.
Storms will move / develop eastwards and should affect the Czech Republic and SW-Poland during the late morning and afternoon hours.

Further towards the north - Belgium, the Netherlands, N-Germany - the main focus for thunderstorm evolution will be the passage of a weak upper-level wave between 12Z-18Z, which will move from the SW towards the ENE.
In addition, divergence at upper-levels should increase in response of an approaching strong upper-level jet from the SW.

Environment is characterized by nice LL shear of 10-15m/s and SRH 1km values of 100-200J/kg. Mid-level lapse rates will constantly steepen and EL values indicate possible tops of up to 8km. Of particular concern will be somewhat steeper LL lapse rates as PBL gets more humid and temperatures will approach 15°C which could be fine for some enhanced LL instability release.
Environment will support storm rotation, especially if storms move off the hodograph. The main threat will be a few severe and possibly tornadic cells with an attendant hail risk .
Latest thinking is that expected storm coverage won't be so robust to issue higher probabilities but area has to be watched.

The same for NE Germany and NW Poland during the afternoon and early evening hours although easing instability release should slowly limit severe weather threat .

South of an east-west aligned frontal structure, models show a pretty humid airmass covering south UK with dewpoints at or above 10°C.
A weak disturbance will cross the area from the SW and should provide lift for thunderstorm development. Although thermodynamic stratification gets somewhat worse compared to yesterday ( especially between 900 - 700 hPa ) 200-300 J/kg SBCAPE looks reasonable. Enhanced LL /DLS shear and low LCLs indicate the possibility for an isolated tornado report although mostly subsevere hail can be expected, too.

Strong instability release over Ireland and DLS of up to 15m/s could locally support a severe thunderstorm with large hail, but expected coverage would not justify a level-1.

Rapidly intensifying depression NNW of Portugal will constantly shift eastward. Strong forcing will spread northward mainly during the latter half of my forecast period. A combination of intense shear and low-end instability release poses a risk for organized thunderstorms and a developing cluster of storms can be expected to cross the Bay of Biscay from the SW between 00Z-06Z.
Each storm should be able to produce the full range of severe weather, including severe wind gusts and isolated tornadoes. The main limiting factor for a more pronounced severe weather event will be the defined instability release.
An update may become necessary during the course of the day !

...Parts of Austria, Slovenia and Hungary...

Main concern for an isolated severe thunderstorm should be confined to the level-1 area.
A mixture of dynamically and diurnal driven thunderstorms will evolve mainly over extreme NE Italy, Slovenia and S-Austria at about 11Z onwards. A moist boundary layer and still steep mid-level lapse rates should be enough for locally significant instability release. 20m/s deep layer shear should support mainly a large hail threat with stronger cells, although a well mixed layer at lower levels ( up to 10°C spread forecast ) could support an isolated severe wind gust report,too.

Although strongest and most severe thunderstorm activity should occur just east of the area of responsibility a discussion will be necessary for a small area north of the Ukraine.
A short wave trough will cross the region from the west between 9 and 18Z and will be the focus for scattered thunderstorm development.
An increase in LL moisture, steep lapse rates and strong shear at all levels favor an enhanced severe wind gust / large hail and an isolated tornado risk. Limited instability and pretty high condensation levels avoid the issuance of higher probabilities.