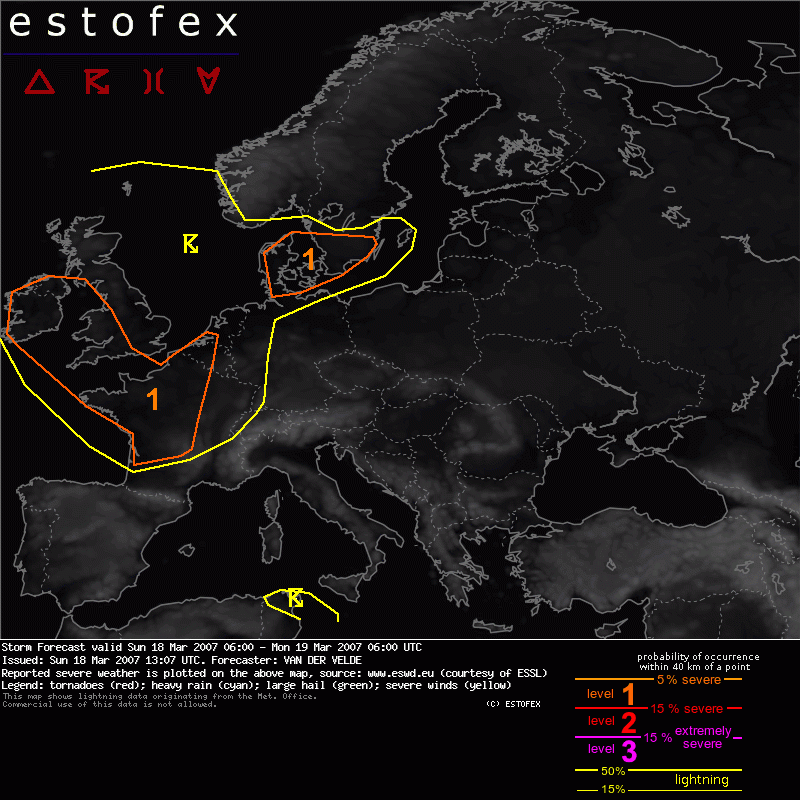 A drastic change of weather pattern occurs during the present and next forecast period over much of western Europe as the blocking high makes way for a pool of cold maritime air of arctic origin sinking SSE-ward into mid-latitudes with the meridional flow at the west side of the low pressure centered over southern Scandinavia. Main convective activity should occur near the postfrontal trough affecting the area from Ireland into France. This is quite far behind the cold front. Elsewhere behind the front open-cell type of convection is shown by Meteosat at this time.
Some cells currently make it into southern Sweden, while the occlusion of the low regenerates chances for convection over Denmark. Although overall thunder coverage will be low, conditions for deep convection are favourable over a large area.

Both level 1 areas will be exposed to enhanced convective activity and low level shear greater than 10-15 m/s, low LCL heights, and at least moderate deep layer shear >15 m/s, up to 40 m/s over SW Ireland into France. Although no strongly veering winds with heights are anticipated due to cold air advection compensating friction, chances seem present that tornadoes could occur at isolated scale from storms that are able to develop a mini mesocyclone. Occasionally SREH reaches over 100 m2/s2 or more (Denmark, 250 m2/s2) but instability may be reduced in these local areas of warm air advection.
Most of all action in the level 1 areas should occur during the evening and night, e.g. northwestern France 00Z according to GFS timing. Average boundary layer mixing ratios are progged by GFS to stay over 3 g/kg in areas with instability where air is drawn inland from sea, which may allow reasonable lightning activity. Besides the isolated tornado chance, severe gusts may occur.