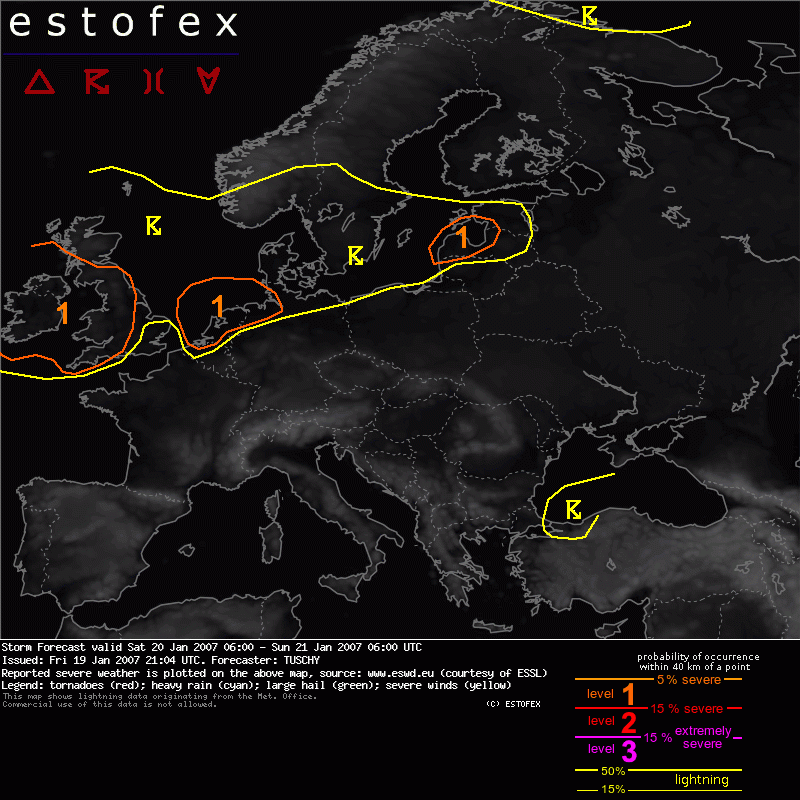 Progressive upper-level low, part of an evolving omega pattern over the N-CNTRL Atlantic, will continue to slide towards the east. Upstream of this upper-level low, influx of very cold mid-level air from the north can be materialized .
Impressive WAA on its downstream side will overspread most parts of SW / S and CNTRL Europe, with very warm and dry conditions over the Mediterranean.

19Z IR images indicate widespread convective activity NW of Ireland under the pool of very cold mid-level air and models like GFS show only marginal warming on its eastward drift ( partially compensated by somewhat warmer SSTs around Ireland and UK ).
First area to watch out for severe weather will be Ireland.
Main concern for thunderstorm potential arises with an approaching disturbance from the NW, which will open up just NW of Ireland, reaching Ireland during a 12Z-15Z period.
GFS indicates a small, but compact UVV field, crossing Ireland from the west, providing enough forcing for convective activity.
LCLs will drop down to 500-700m above ground and intensifying delta - T's between 950-500hPa will provide enough instability release for up to 100-300 J/kg SBCAPE.
This will be also supported by mid-level lapse rates, increasing significantly to more than 8K/km.

As expected with such winter-time depressions, kinematic parameters are favorable for storm organisation, especially the LL shear with up to 20m/s and there will be a significantly enhanced risk for tornadoes and I don't want to exlcude even an isolated strong one!
The tornado threat should be particularly high between 13Z and 18Z, but conditions stay fine till the end of the forecast period due to numerous, weaker disturbances crossing Ireland from the WNW.
Enhanced DLS will also favor severe wind gust and isolated large hail reports.

15Z onwards, things will become interesting for most parts of W / SW - UK, too.
Main concern will be the final postfrontal boundary layer quality of a departing cold front, which crossed SE - UK during the morning hours. GFS indicates a significant drop of low-level dewpoints into the lower singles, supporting a pretty large T-Td spread over UK during the afternoon hours ( LCLs as high as 1000m ).
Marginal diabatic heating and an increase in moisture as a result of the approaching UL-disturbance will be enough for lower LCLs along the coastal areas of SW -UK between 15Z-17Z and from 17Z onwards further inland ,too due to a slow cool-down of the PBL.
GFS also develops very steep LL-lapse rates mainly along the coastal areas of W / SW and S - UK due to the strengthening onshore flow.
Otherwise, no significant differences compared with Ireland regarding the expected severe weather threat.
17-20m/s LL shear and SRH1 up to 250J/kg will be available and tornadoes are a distinct possibility.
Any developing storm would also experience up to 35m/s DLS, so severe wind gusts and isolated large hail reports can be expected .

...Coastal areas of Belgium, the Netherlands and NW Germany...

Rapidly cooling mid-levels will support a broad area of low-end instability release.
Expect scattered thunderstorms to develop over the S-North Sea between 23Z - 06Z , moving towards the E / SE.
Main risk will be a severe wind gust threat due to very strong winds at 850hPa.
Storms, which will move onshore along the coastal areas of the aforementioned countries, will experience enhanced LL shear and the risk of an isolated tornado will increase towards the end of the forecast period.
Highest threat will be along the coastal areas, where strengthening moisture advection and cooling mid-levels will be fine for low-end instability release well inland.
Storms could develop as far east as Denmark, but differences in model runs preclude me for issuing a level that far towards the east right now.