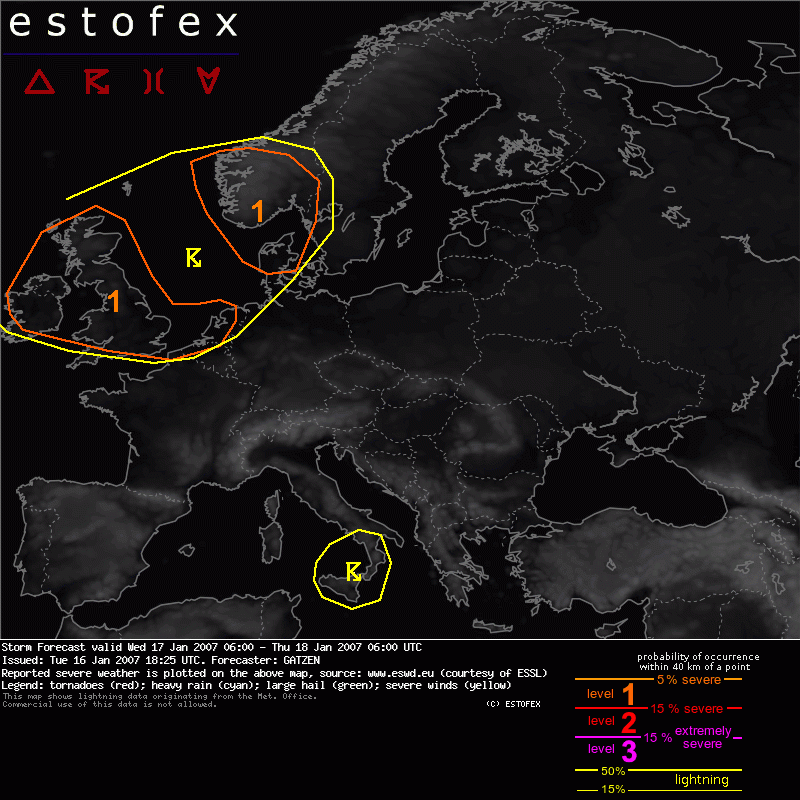 Delta of strong westerly flow over northern Atlantic evades eastward into western Europe. While very strong upper jet streak travels over the Atlantic Ocean, a short-wave trough ahead of the jet rapidely moves across Brtish Isles and North Sea into Scandinavia during the period. Another trough that forms the southern part of the delta flow regime is forecast to travel over western Mediterranean and central Europe. At lower levels, relatively deep rich low-level moisture has developed over western Mediterranean underneath a strong inversion in the range of subtropic ridge. While the upper trough approaches, this inversion is expected to decrease significantly, and CAPE will likely develop during the period. To the north, rich moisture spreads into France and further into Benelux, while cold/dry air mass is present from Germany eastward and over the Balkans.

Interesting situation is expected to develop over British Isles underneath the first upper trough north of propagating jet streak. Moist and convectively mixed air mass is expected in the range of this short-wave trough that rapidely moves eastward into southern Scandinavia. Given strong synoptic forcing due to strong DCVA and only weak CAA, showers and thunderstorms will likely develop. While DLS is forecast to be not too high, LLS is forecast to be around 10..15 m/s near the coasts of British Isles and southern Scandinavia. 0-1 km SRH values of about 100 J/kg spread eastward during the period, reaching southern Scandinavia in the night hours. Given almost no CIN and forcing, thunderstorms that form will likely profit from this low-level helicity, and shallow mesocyclones and small bowing lines are forecast to develop near the coasts. Marginally severe hail, strong wind gusts and even isolated tornadoes are not ruled out. Overall threat seems to be high enough to warrant a level 1. It is not clear how far south deep convection will occur. Although latest GFS does not indicate deep instability over southern UK, strong DCVA in the range of the upper trough will also affect these regions. Given rather high low-level instability, showers and thunderstorms may develop along the trough axis/main vort-max, where low-level forcing will likely be strong enough for initiation. Given south-westerly surface winds east of the main vort-max, and about 10 m/s low-level vertical wind shear, mesocyclones capable of producing marginally severe hail, strong to severe wind gusts and even isolated tornadoes are also forecast for this region. Convection that develops along this trough axis may also affect most of the southern North Sea in the afternoon/evening hours.