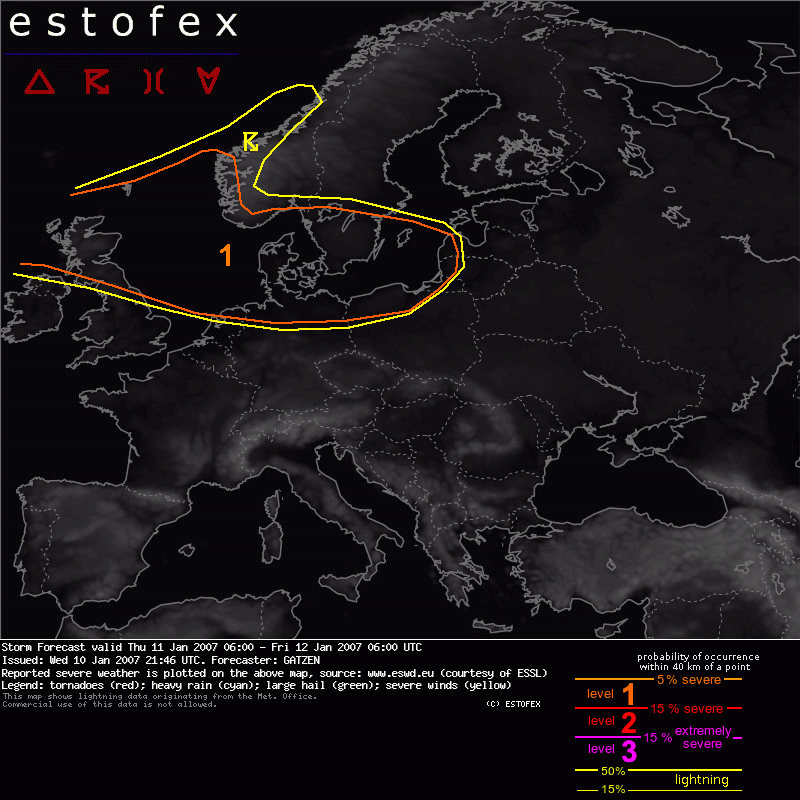 Expected strong jet streak reaches north-western Europe this morning. Strong cyclogenesis at the northern flank of this jet streak is present, and an intense low pressure system is expected E of Iceland. A secondary low is forecast to form near the trough center that propagates to south-eastern Sweden, while downstream frontal system will cross British Isles, North Sea region, southern Scandinavia, and Poland during the period.

Focus of expected convective activity is the strong upper vort-max at the leading edge of the jet streak. Expect low-level moist maritime air mass and neutral lapse rates in the cold air mass, rather strong lift ahead of the vort-max will likely result in CAPE. Latest model output suggests that this region of instability will move across the North Sea during the day, where showers and thunderstorms are forecast. Strong winds are expected to back just ahead of the vort-max, resulting in high SRH values near the vort-max. Thunderstorms that will form will have a potential to organize given this favorable veering and strong vertical wind shear reaching up to 20 m/s LLS. Shallow mesocyclones and bowing lines are forecast to develop, capable of producing high winds mainly. A few tornadoes are also not ruled out, but relatively poor moisture in the cold air mass is expected to be a limiting factor. Showers and thunderstorms are forecast to spread across southern Scandinavia and southern Baltic Sea during the period reaching the Baltic States in the morning hours.