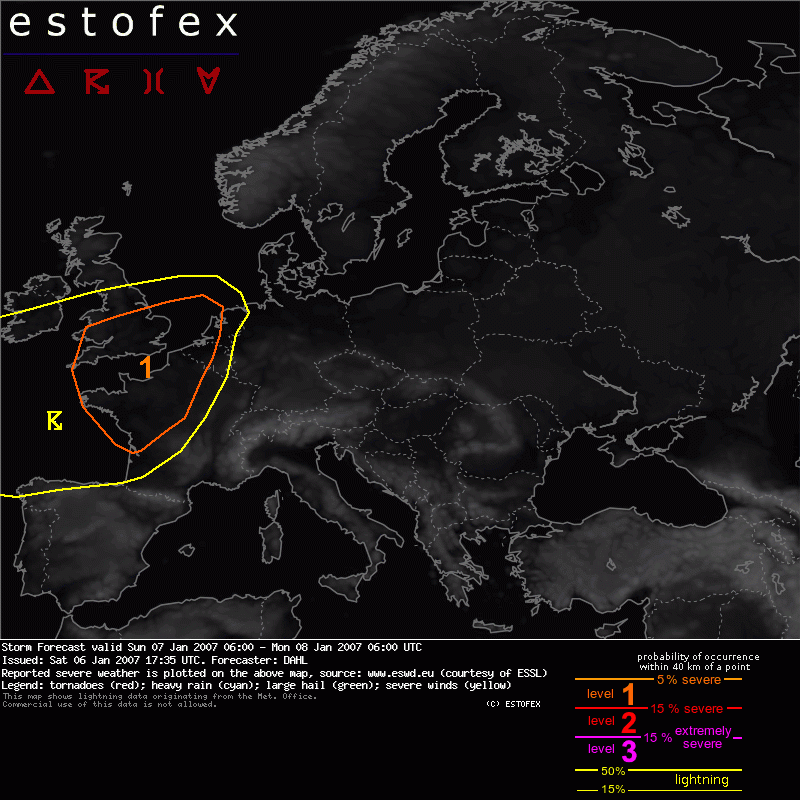 Progressive upper flow pattern continues, with several imbedded vort maxima affecting central portions of Europe on Sunday and Sunday night. Particularly vigorous DCVA maximum, accompanied by an intense surface low, will reach the British Isles in the evening hours and stretch from the North Sea across the Benelux States and W Germany into E France on Sunday 06Z per GFS. This fature will be the focus of potentially severe convective evolution this period.

It appears that some potential for comparatively shallow convection exists along and ahead of the cold front crossing the S British Isles, W France and the Benelux States late on Sunday. As is typical with these systems, CAPE fields are quite inconspicuous but 700 - 1000 hPa theta_e difference reveals the development of potential instability ahead of the cold front, possibly tied to mid/upper level dry air overspreading the pre-frontal air mass. Strong mesoscale ascent along and ahead of the SFC front may realize weak CAPE and support scattered, possibly weakly electrified TSTMS. Main concern will be strong low-level shear, suggesting that there will be some potential for severe wind gusts and a few tornadoes. Though convection with these systems in very challenging to predict, lending this forecast quite some uncertainty, a level-one risk will be issued.

Otherwise ... convective potential should be rather low.