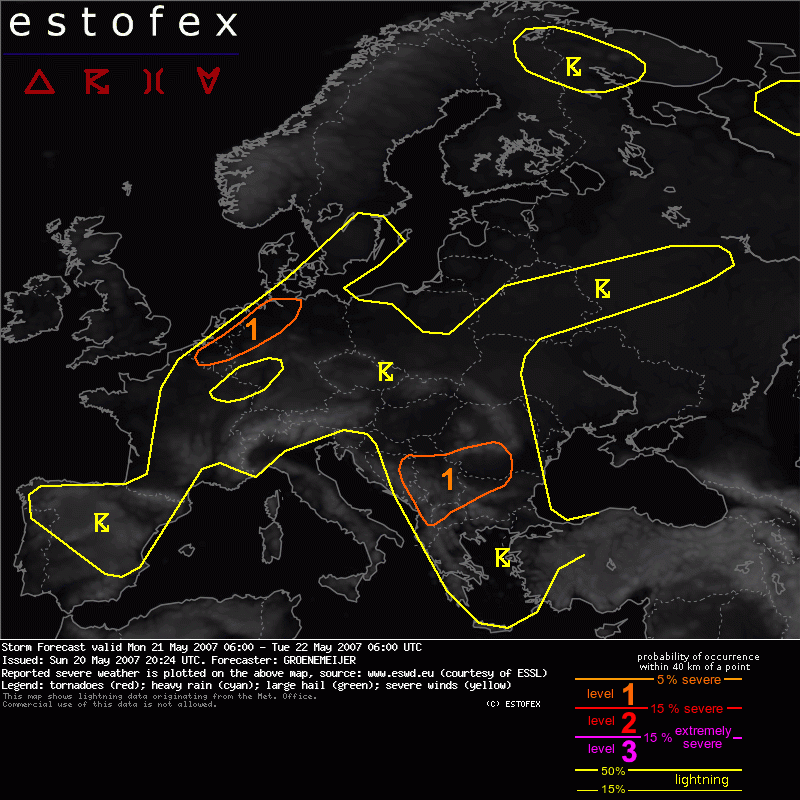 Monday at 06:00 UTC, a mid/upper-level low pressure centre west of the Iberian Portugal moves slowly southward. Another low pressure system is stationary over the northern Aegean Sea. A jet initally extends from the British Isles over S Finland to N Russia. A westerly jet approaches Europe from the N Atlantic Ocean and has its exit region over the northern British Isles at the end of the forecast period. A frontal zone separating a warm air-mass over the European continent and cool air over the Atlantic initially stretches from Gibraltar via Madrid to the southern North sea and on to Kopenhagen.

Widespread convective storms are expected to develop during the late morning and early afternoon over the level 1 area. Lapse rates in the 900-700 hPa layer are expected to steepen to around 8 K/km and MLCAPE of 500-1000 J/kg should be able to form. A NE wind at 700 hPa of 15 m/s over weak surface winds created moderately strong shear in which well-organized multicellular systems and perhaps a few mesocyclones are forecast. As a result, a chance of large hail will exist as well a risk of wind gusts approaching the severe threshold. The storm activity should slowly subside after sunset.

East of the aforementioned frontal zone evapotranspiration below a capping inversion that has in most places not broken on Sunday, moisture has been pooling as is, for example visible in the Nancy sounding of 12 UTC. Temperatures should rise to values between 25 and 30 C during the day and 12 g/kg boundary-layer moisture should yield 1000-1500 J/kg MLCAPE. Storms that are expected to initiate starting in the early afternoon. The instability and 15 m/s sfc-700 hPa shear suggest well-organized multicells and possibly a few supercells are to be expected with large hail as a main threat. A couple of severe gusts are possible, too.