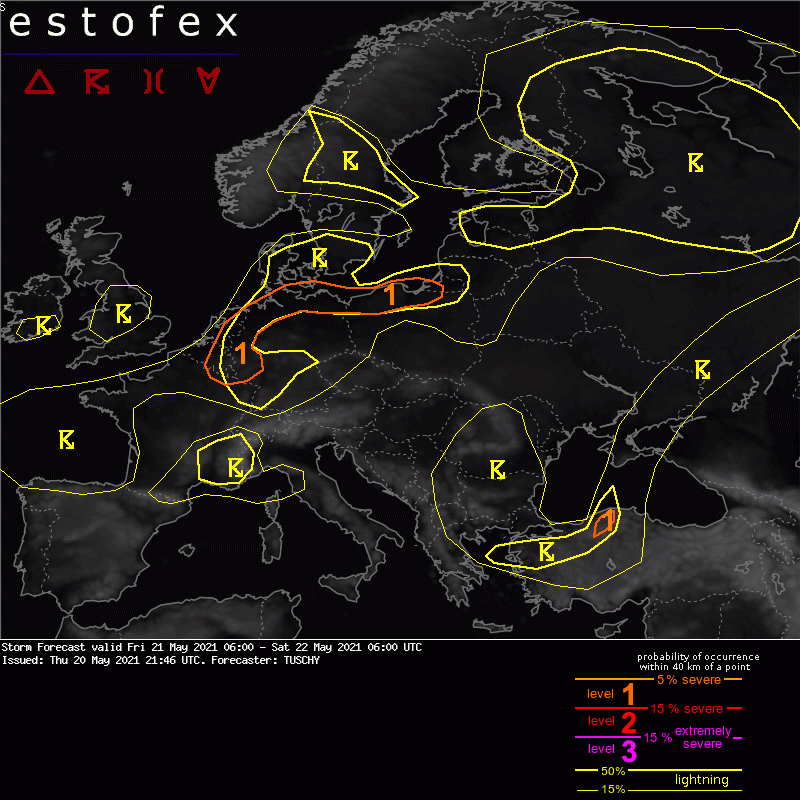 A level 1 was issued across Benelux into far NW Germany mainly for an isolated tornado/hail but mainly for a severe wind gust threat.

A level 1 was issued for N/NE Germany into Poland mainly for isolated large hail and severe wind gusts. An isolated tornado event is possible.

A level 1 was issued for parts of N-CNTRL Turkey mainly for hail and severe downbursts.

An anomlaous height field yields an unusually far south displaced and strong jet, which is placed over the S Bay of Biscay to the Alpine region before bending south towards Greece. Focusing on the height field, we see a minimum over the S North Sea in response to a filling upper low, which is part of a large-scale gyre over W/N Europe. This area is surrounded by positive geopotential height anomalies, which extend from the NE Atlantic to N Africa to S/E Russia/Siberia. The only interruption is an upper trough with negative anomalies, which crosses Greece during the forecast and shifts leisurely E towards W-Turkey.

At the surface the depression over UK/later S North Sea pushes an occlusion E over CNTRL Europe although it weakens and could transform into a detached cold/warm front wave, which frames E/SE Germany. The occlusion bends back towards the Iberian Peninsula in form of a wavy / slow moving frontal boundary.
Another depression over Finland features a classic warm / cold front and occlusion pattern with a narrowing warm sector. Elsewhere, regionally enhanced BL forcing by numerous convergence zones will be the main foci for enhanced convective activity.

... Belgium into the Netherlands and NW Germany ...

Shallow warm-core structure of the English depression yields an impressive sub 700 hPa wind field (50-70 kn), decreasing aloft. Hence forecast hodographs during the late afternoon/evening into the first part of the night show a strong kink in the sfc-3km layer. A severe wind gust driven level 1 was issued due to gradually structuring shallow but discrete mesocyclones and a well mixed an partially deep (1000 m plus) sub LCL layer. In addition numerical guidance differs in confined bands with better LL moisture sneaking in from the SW which lowers LCL to 800-500 m. An isolated tornado event can't be ruled out in such an environment. Overall storm coverage is not impressive but a few longer lived storms should occur.

Same problem as mentioned above - a missing focus for clear CI. Right now models keep an eye on better LL moisture over NE Germany/N Poland (combined with better H7-H9 moisture), where weak LL confluence exists during the early afternoon in response to the passage of a weak surface wave. Anyhow, expect numerous thunderstorms within a 400-600 J/kg MUCAPE and 15 m/s DLS setup, so multicells with hail and strong to severe wind gusts are possible. An isolated tornado event is possible for deviating storms with good streamwise vorticity input in the 1-6km layer, also favoring a transient supercell event. We kept the level 1 to the ICON EPS maximum, which had rather good consistence during the past few runs.

Isolated models hint on spotty CI over SE Germany to the Czech Republic, but conditions currently look too hostile for sustained convection to stick with that idea. If orography can support one or two events, hail and severe wind gusts would be the main hazard.

...Belgium into CNTRL Germany (evening into the night) ...

Eastward pushing trough axis touches this area during the night and amount of lift remains questionable north of a belt with strong subsidence (CNTRL France to S-/CNTRL Germany). In case convection can organize along this vorticity lobe, a line of organized convection affects this area. DLS in the 15-25 m/s range and weak MUCAPE including good directional shear (SRH aoa 200 m^2/s^2) could support a few rotating updrafts with severe wind gusts and isolated hail. Advanced time could support some BL cooling and slighty elevated convection, but once again, not much BL modification is needed to receive an isolated tornado report.
Betimes convection outruns best SRH and moves into stronger subsidence over N-CNTRL Germany with constant weakening forecast.