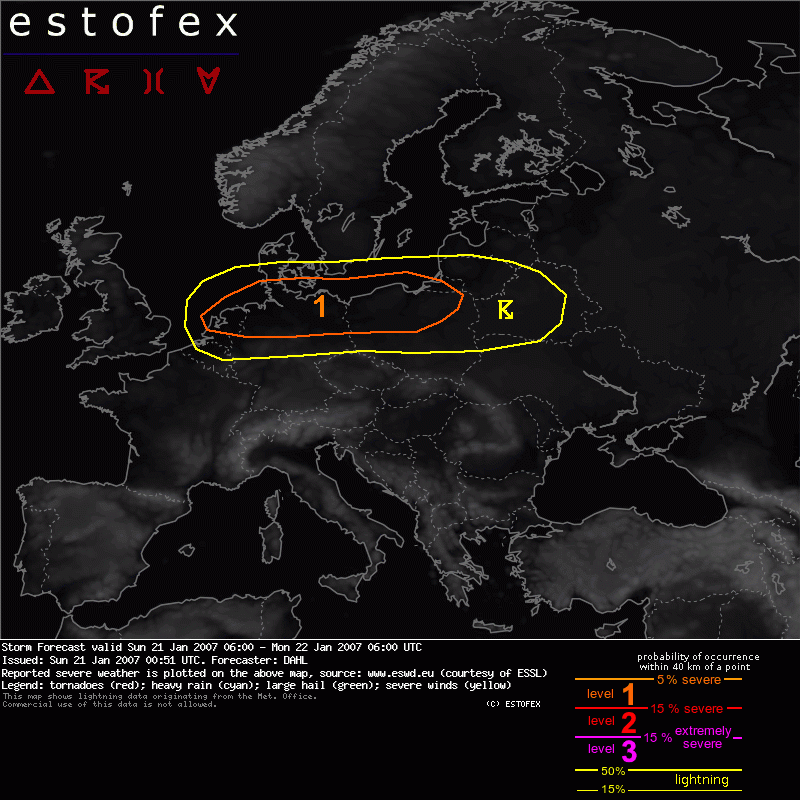 Strong westerly upper flow remains in place over central portions of Europe, undergoing some backing on Sunday as an Atlantic vort max progresses southwards, reaching the Biscay/Iberia late on Sunday. Main low-level baroclinic zone should continue to make slow southward progress and stretch from the N Iberian Peninsula across S France and S Germany into the southern Belarus by 12Z. SFC low over the Baltic Sea/Baltic States is expected to weaken while slowly progressing eastward. Weak cyclogenesis will occur over NE Spain/NW Mediterranean along the main frontal boundary ahead of upper vort max early Monday morning.

Convective activity on Sunday will be associated with a quickly eastward moving upper vort max, which will cross the Benelux States, N Germany, Poland, and the Belarus during the period. CAPE should be rather shallow and modest, but about 30 m/s 850 hPa flow will maintain 10 m/s LLS, supporting 0-3 km SRH in excess of 400 J/kg ahead of the vort max. This suggests that some potential for shallow mesocyclones or bowing line segments will exist, capable of marginally severe hail, severe wind gusts and maybe also brief tornado or two.

Convection should also occur across the British Isles and adjacent waters, but lack of focused forcing for ascent should limit depth and organization of the storms, and lightning should be too sporadic to warrant a TSTM outlook.