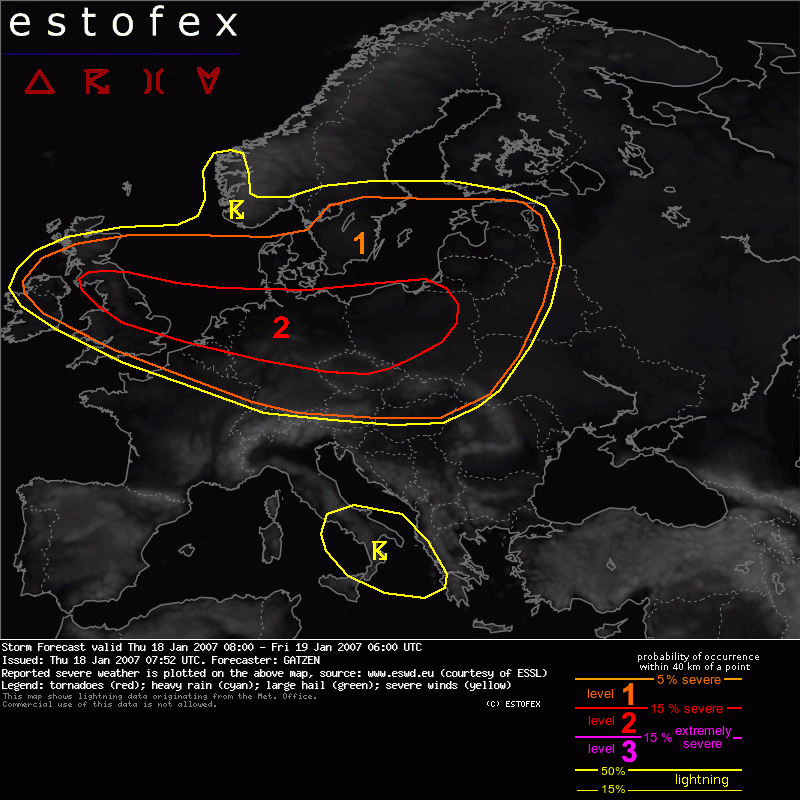 Delta of strong westerly polar jet is present over Europe, with a trough over central Mediterranean, another over southern Scandinavia, and a subtropical high over Iberian Peninsula. At 300 hPa, a 100 m/s jet streak that has formed over western Atlantic rapidly spreads into western and central Europe during the period, providing strong DCVA at its northern flank, where cyclogenesis is forecast. Associated intense surface low is expected over the Baltic States on Thursday. At low levels, a tongue of very moist maritime air mass is advected into Europe ahead of a cold front that will cross British Isles, Germany, and Poland during the period.

Strong cyclogenesis is expected in these affected areas, with intense precipitation in the WAA regime, very moist air mass and very strong LLS/SRH in the warm sector, strongly forced convection along the cold front, dry intrusion above the cold front/cold sector air mass, as well as some convection in the range of the following surface trough and embedded back-bent occlusion. Latest satellite images show an impressive dry intrusion making its way to the east. Surface observation from British Isles indicate dewpoints of about 11..12 C in the warm sector air mass and relatively deep moisture. Following the ingredients-based theory of severe convection, it seems that an outbreak of severe convection may be possible, but it is more likely that instability will not be sufficient for such a scenario.

Low-level moisture in the warm sector air mass as well as in the convectively mixed polar air mass W of the cold front will be sufficient for weak instability given neutral lapse rates at least. Favorable vertical wind shear of about 25 m/s LLS, 60 m/s DLS, around 600 J/K 0-1 km SRH will be present E of the cold front as well as in the range of the following short-wave trough and embedded back-bent occlusion. Additionally, strong forcing will likely occur especially along the cold front. Great uncertainty exists about mid-level lapse rates that will be rather poor in the warm sector initially and are expected to improve significantly when the dry intrusion of the low reaches the warm sector ahead of the following trough.

Current thinking is that at least weak instability will be present sufficient to allow a strongly-forced convective line along the cold front that moves eastward over southern/central British Isles, northern France, Benelux, northern Germany, and northern Poland. Given that forcing and vertical wind shear will be maximized from Benelux to northern Poland, thunderstorms are expected especially in this region, where models show a narrow region of low LIs. To the south, cold front will likely become parallel to the flow. Increasing distance to the trough center and dry intrusion will likely lead to rather shallow instability and chance for thunderstorms will be lower.

Given up to 50 m/s winds @ 850 hPa and around 35 m/s winds @ 950 hPa, vertical momentum transport inside of the downdrafts along the convective line will likely produce severe wind gusts at the surface, even when convection will not be well-organized. Expect a strongly-forced convective line, we decide to issue a level 2 that implies the widespread character of severe wind gusts along the cold front as a combination of strong synoptic-scale pressure gradient and convection.

A second scenario may come true when steep lapse rates of the dry intrusion will spread across the warm sector, leading to significant CAPE. This is now shown by latest GFS00 model run. Convection that forms may merge into a well-organized linear MCS as strong vertical wind shear will be able to balance the forming cold pool. Such a convective line may produce even higher wind gusts due to mesoscale low-level jets in the range of the cold pool. This scenario includes widespread severe wind gusts as well as a couple of very high wind gusts of more that 40 m/s. This will mean that the highest gusts of this event will occur along the cold front over most places. An upgrade may be warranted when such a system evolves during the afternoon/evening hours.

In both scenarios, high low-level SRH values will be present in the warm sector. Embedded mesocyclones may form along the convective line, capable of producing isolated large hail and tornadoes. There is also a chance for non-supercell tornadoes along the leading gust front given high background helicity and locally favorable low-level buoyancy.

In the range of the following trough, slight instability in the convectively mixed air mass may be sufficient for a few convective cells. Given strong vertical wind shear and helicity underneath the trough, showers and thunderstorms will likely organize into mesocyclones and/or bowing lines capable of producing severe wind gusts and possibly tornadoes. However, latest models guidance seems to indicate relatively stable conditions in the range of the back-bent occlusion, and development of convection is questionable at this time.

Short-wave trough over southern Scandinavia rapidly propagates eastward ahead of the approaching jet streak. In the range of this trough, convectively mixed air mass is present that will likely produce showers and thunderstorms over southern Sweden and the Baltic States during the day. Given rather high low-level wind shear and helicity, organized convection capable of producing strong wind gusts and possible tornadoes may develop. Convective activity is expected to weaken further inland.